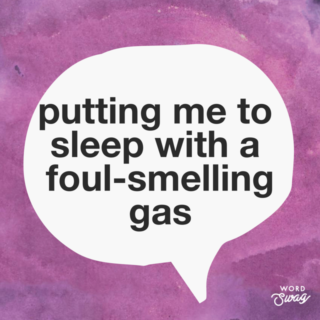 When I was fourteen, my friend Martin Woolacott – known universally as ‘Wally’ – drew a wonderful cartoon of our little group of schoolmates. Like any good caricaturist, Wally didn’t pull his punches. One of our fatter colleagues was depicted as a barrage balloon. My defining characteristic was a mesh of barbed wire, bursting out of my mouth in all directions, which seemed to me only a slight exaggeration of the braces that I wore on my teeth at the time. I hated these braces, which made me self-conscious about opening my mouth, and I absolutely knew with the naïve certainty of adolescence that I would never get a girlfriend while I had them.

There was something of a vogue for orthodontics in the early Seventies, and my dentist had a glint of enthusiasm in his eye when he proposed his solution to my overcrowded jaw. He extracted eight of my healthy teeth – over two sessions – putting me to sleep with a foul-smelling gas anaesthetic that would be considered much too dangerous for use in a local dental surgery today. I was then referred to Mr Barnett – a specialist at The London Hospital, who cemented a metal band around each of my teeth and began the long process of coaxing them into line by means of connecting wires and elastic bands.

At my first appointment, I remember a feeling of terror in the waiting room of the Orthodontics Department, which was dominated by a large reproduction of William Powell Frith’s great Victorian painting of ‘Derby Day’. I would become very familiar with this picture over the next two years, and I still find myself counting my teeth with my tongue whenever I see it.

By the second visit, terror had subsided to trepidation, and in time the monthly appointments became part of my routine. At first, my mum accompanied me to the hospital, but after a while, I began to go on my own, taking the District Line from Upminster to Whitechapel and going back to school for the afternoon.

If major adjustments were required, I might be at the hospital for some time. If not, then Mr Barnett would just check to see that all was well, and I could be in and out in ten minutes. No self-respecting schoolboy with a legitimate reason to be out would want to rush back to school too early, so I would stretch the limbs of my liberty, choosing a direction and walking for fifteen minutes or so to see what I could see.

Walking westwards, I was excited to find that I could walk right into the heart of the City of London. Heading east, I got no further than The Blind Beggar pub (where Ronnie Kray murdered George Cornell) and decided abruptly that it would be safer to venture in a different direction.

As my confidence in finding my way around grew, I began to vary and extend my walks. One day in 1971, heading towards Spitalfields, I saw groups of Asian men gathered anxiously around newspapers to get the latest news from the Indian-Pakistani War – an event that didn’t cause much of a stir in Upminster.

Early in 1972, the miners’ strike led to power restrictions, including a ban on the use of floodlights, so evening football matches were moved to kick off in the afternoon. I was a regular at West Ham’s home games at that time, and as luck would have it, our FA Cup replay against Hereford United was scheduled for the day of my hospital appointment. It was just a few stops down the line from Whitechapel. Surely nobody would ask too many questions if I got delayed and was unable to return to school that day?

I assumed there would only be a small crowd at Upton Park on a weekday afternoon – I was wrong. West Ham won 3-1, Geoff Hurst scored a hat-trick, and 42,000 people shared this little piece of sporting history (I wonder what their excuses were?).

I never warmed to orthodontics, but I came to enjoy my solitary trips to Whitechapel. My lifelong pleasure in walking around London dates back to those days, and even at the time I regarded my tentative explorations as a sort of rite of passage – deliberately pushing my boundaries into a wider and more cosmopolitan world.

The braces were finally removed in the summer of 1972, and I started going out with my first girlfriend a few weeks later. This was probably a coincidence.