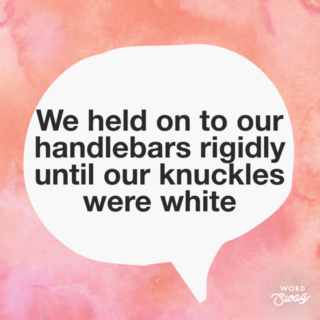 On a fine clear spring or summer’s day my brother and I would go out on our bikes. My brother was two and a half years older than me so he got to pick where we went normally and he always knew the way. I just used to follow, mainly because I just enjoyed cycling and looking at the countryside and seeing the birds and trees and rabbits scurrying out the way. It was so nice just to get away from the houses of the city. I never really bothered where we were going or the route we took there or back.

You see we lived on a housing estate on the edge of Coventry. There was a park just the other side of the road from our house but it was still urban really. You could see the houses the other side of the park. That was our summer route to church, it was too muddy in winter so we had to go round the road. If you went up the road to the main road, not far, there was another park with a boating lake. It had been an open cast coal mine, hence the lake. In those days before the M6 was built, although technically part of Coventry, it really marked the edge of the city and the start of the countryside. So it was that we would leave the congregated boys on their bikes in the park and we would go for a ride.

Most times we stayed fairly local, after all it was less than a mile to open country. Sometimes during the summer holidays we would go out for the whole day and go further afield. In that case we did not worry about how quickly we got out of the city. It only took an hour at most to cycle right across the city anyway. On these days we would cycle to Ryton and then down towards Banbury. We would either turn off at Marton to Prior’s Marston and visit the farmer my dad was evacuated with during the Second World War, or carry on to Banbury and spend time there, or veer off right to Edge Hill. The last was one that became more popular when we became older teenagers and would sneak in an underage half at The Castle Inn, Edge Hill. Old Hooky still evokes memories of cycling.

On other occasions we would go across to Green Lane and then via Stoneleigh to Charlecote and Stratford on Avon, or past Warwick University to Kenilworth, or veer down to Bourton on the Water in the Cotswolds. We took sandwiches with us and water. We also, in late summer, took plastic containers with us and combined cycling with blackberrying. Blackberry and apple pie was dad’s favourite, so if we mistimed our return and were late it was a useful peace offering. We always had plenty of apples in as a friend up the road had a tree that was always laden with apples every year.

What I really loved when cycling was careering down hill at break-neck speed. We knew all the hills where this was possible. My other brother and I had a game, after he got a speedometer for his bike. We would cycle to Southam and then wait until the traffic had cleared as best we could and then go as fast as we could down the steep-hilled high street and try and break the 30mph speed limit. It was a triumphant day when, with a following wind, we finally did it. Triumphant, yet sad, it just didn’t have the same allure any more. But my favourite hill was Corley.

For a start, it was local enough for us to be able to get there and back in a few hours. Also it was steep and long and went through a narrow gorge, which increased the excitement. It was a minor road which met a larger road at the bottom of the hill at a ‘T’ junction. I preferred it to any ride they had at Alton Towers at the time. The fact that it was dangerous just added to the excitement. The top of the hill had the advantage of having the best views in the area. (The top of the hill was 600 ft above sea level and Coventry city centre was 300 ft above sea level with the Old Cathedral spire being 300 ft high. If you looked through the keyhole of Corley church door you were supposed to be able to see the top of the Old Cathedral spire, but I never managed it.) This is one route I did learn.

You went through the estate to Grangehurst School, down the hill next to the school and up the other side to Longford. At the main road, you turned right along the parade of shops, past the old wood yard and over the canal. Immediately past the bridge you turned left. On the left was the canal, on the right a row of miner’s cottages. We never really bothered looking at the cottages. There had been so many pits around the area that miner’s cottages were an unremarkable sight. These were flint-faced and looked dour when wet. At the end of the cottages the road turned sharp right and became Woodshire’s Road leaving the canal behind.

There was now some countryside before you reached Keresley so we slowed down to enjoy it. Rowley’s Green Road and Winding House Lane followed. We would stop to watch cows or sheep grazing. In autumn we would stop and marvel at the Peewits gathering for their winter migration. I haven’t seen such gatherings in many years now, something that would have seemed impossible then. We would watch the corn gently waving in the wind or standing stately in a rigid upright position when the air was still. The barley would be bowing it’s head as if in grief. The flies would always be there but that was normal. It never occurred to us that pesticides would get rid of them too.

Butterflies, fluttered by. Orange Tips, Large Whites, Swallowtails, Small Blues and my favourite, Red Admirals. Thinking about it, it was probably the name, ‘Red Admiral’, that I really liked. We lived as far from the sea as it was possible to get in England. We never saw the sea except for on our annual fortnight’s holiday in a caravan at Croyde Bay in Devon. This gave the name a romantic, adventurous feel to a landlocked city boy. I would imagine that it was named after some blood-thirsty admiral of the fleet, just on the legal side of piracy. A modern Drake, perhaps.

The air out here was relatively clean as well, so long as it wasn’t coming from the south, where Coventry lay, or from Birmingham in the north-west. We would gulp it down in gratitude and savour its taste. This was before the introduction of Oil-seed Rape and its hay-fever inducing pollen that would blight my later cycling days. This was before there were so many cars on the road that their pollution was spread even to rural areas. This was before the M6 cut an impenetrable visual barrier through the landscape. You just drank in the view with your eyes, the air with your lungs and the sounds with your ears. Bliss!

When we arrived at Keresley, we would turn right up Bennett’s Road, away from the colliery, and then left by Keresley Rugby Club along Burrow Hill Lane. We would go up the hill at Corley Rocks that we would later race down and to the church. In truth we never managed to cycle up the hill with our heavy, steel framed bikes. It was laborious, but we knew the trip back down would be glorious. At the church we would stop and rest, eating biscuits, usually Jammy Dodgers or Custard Creams, but occasionally Gingernuts. We would sip our water and just take in the view from the various directions. Even if the smudge of the housing hadn’t given their locations away you would have known the locations of Coventry and Birmingham just by the change in colour of the air. We knew from experience that the change in colour was accompanied by a change in smell. Something that you didn’t notice though until you left the city. And Coventry had a different smell to Birmingham. What the difference was, I never could quite put my finger on and I never knew why, either.

We would linger as long as possible here, not avoiding the downhill but reluctant to go back to the city. As a result we would very often have to return home as fast as we could go. The hill was useful in getting our momentum going. For this reason the return journey was memorable solely for being head down over the drop handle-bars and the aching legs at the end of it. Except for the hill, that is.

At the top of the hill was a triangular piece of road. We would stop here, settling our nerves, building up our courage for what lay ahead. Then we would begin. The idea was to get as much speed up as possible so the initial triangular section we went down as fast as we dared before the junction at which we turned left. The high hedges made this a blind junction so we couldn’t go too fast and, if we were unlucky, we would have to stop for a car or tractor. Most of the time, though, we made it past this junction still moving. We then started the long, steep, downhill through a sandstone gorge. We peddled as fast as we could and then let the hill take us.

We held on to our handlebars rigidly until our knuckles were white, partly out of desperation trying to keep our bikes on the bumpy road, partly out of exhilarating fear like you would on a roller-coaster. At the bottom was the real heart-stopping moment though. You would jam your brakes on as late as possible so as to stop just in time for the junction and the main road. We would squeal with delight, the air would smell of burning rubber as the brakes stopped our bike wheels dead as we skidded to a halt. We would lean back on the bikes as far as possible to stop ourselves going over the handlebars, and, if we had mis-judged or hit a bit of gravel, come off the saddle and put our feet down on the road. Then, side by side we would laugh and laugh, and laugh.