told by Rex The Dog to Derek Bainbridge 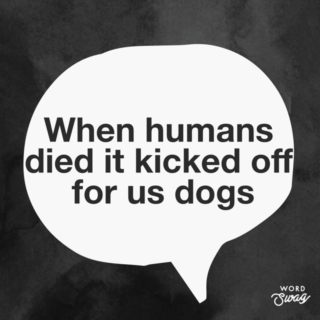 This current Lockdown isn’t so bad if you are a dog. The big plus for us is that our owners stay home with us all day long, which we love. And, we get walkies every day, sometimes twice a day!

But this is not the first Lockdown, not for us dogs. The humans might have forgotten but a virus came to Hertfordshire once before and although any animals could be affected, the dogs got all the blame.

The virus was rabies. While it only affected animals the humans weren’t concerned. When humans died it kicked off for us dogs.

It started in Wigginton near Tring when a dog ran around biting people including Richard Turney, aged 9. Trigger-happy Mr Knight shot the dog. When Richard died of rabies everyone got nervous. Then in Bedford a posh lady died after the dog she was feeding nipped her finger. (Contributory negligence I’d say- to put a finger between food and a hungry dog.) Nervousness increased. On a Banbury train a man actually threw a dog through the window out of fear! Hysterical I’d call it. But then things got worse.

A man from Oxhey died after a fight with a dog on the St Albans Road. Now I’m not saying who started it, I wasn’t there, but it’s really not advisable to get in a fight with a rabid dog. The dog in question was a black Labrador, a gun dog on the edge of the local Earl’s estate. Again I’m not saying anything but the Earl also happened to have 147 rabid deer on his land. Coincidence? Maybe, but dogs got the blame anyway.

Now things got really heavy. Local magistrates issued a control order on all dogs: An extreme lockdown with dogs shut in their homes and no walkies. Many owners appeared in court and were fined 12/6d for transgressions. One, whose dog had one paw over the threshold of his house, asked sarcastically,
“Will I be fined if he looks out of the window?”

Still feel your Lockdown is harsh? Then listen to this;
“Notice is Hereby Given that all Dogs found in the Streets without Owners will be Taken Charge of by the Police and unless Claimed within 48 hours after Capture will be destroyed.”

If that’s not alarming enough then Policemen were also given power to kill on the spot(!) any dog suspected of being diseased.

The atmosphere in Watford became entirely hostile to dogs. Mr Dell, the grocer at the Station, Mr Battershal, the Postman, Mr Kelly of the Eastcourt Arms, all complained of dogs ‘threatening’ their children, quite forgetting that dogs like to play.

Even dogs behaving naturally were reviled; an innocent greyhound that chased and shook a small Maltese in the High Street was unjustifiably vilified in the newspapers. After all that’s what greyhounds do, – chase small furry creatures and give them a damn good shake. ‘Judge not…’

This Lockdown? A piece-of-cake compared to the dog’s life of 1877.