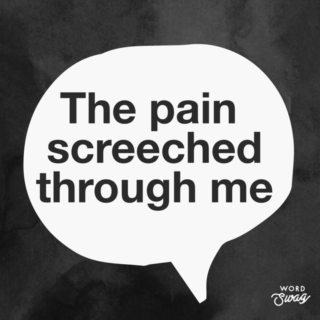 Trigger warning: This story includes discussion of medical procedures and references to self harm which some readers may find upsetting.

I stubbed my toe on the fish tank. The pain screeched through me, banging open every single cell in my body, flooding me with endorphins. I fell to the ground, asphyxiated, winded. The kids stared down at me, Rose reaching out her hand to me, “are you alright mama?” Her soft pink rounded little fingers reached down.

As the pain subsided I realised that suddenly I felt better, better than I had in a long time.

Rose was born in a room that was crowded and small. There was at least six people in there as well as me. As I lay catheterised my hand was outstretched, I hoped in vain for a hand to hold. The Portuguese hospital was clean but institutional. No whale song or water births here. The obstetrician had laughed at me when I mentioned a natural birth. “it is very unlikely that you will need breathing exercises, just relax, and expect a caesarean” Not even my husband was allowed in as he wasn’t hygienic? What did all the Portuguese fathers do, walk, pace and smoke like men in the movies? I had Doctors, Obstetricians, anaesthetists and nurses for company instead. They worked efficiently, professionally. “Help me please, my hand, please can someone hold my hand” I’d thought that the epidural meant I wouldn’t feel anything, no one had told me I would still feel sensation – like they were making bread with my insides. Dr Lorero worked away, kneading and pummelling, his thick fingers sausage-like, huge, like the rest of his six-foot three body. Doing his work, his every day work, cutting windows in women to set their babies free on the world.

I was so grateful that it was him in the operating room rather than Dr Pino. A few days before, the time had come. I was full term, but no baby arrived. I had tried all the usual things, curry, running up and down steps, energetic sex even. But nothing doing. More than a week later I was called in for what was looking like a definite caesarean. I had to go alone on this day and was met by the little doctor, Pino. He was neat, expensively dressed, smart brown shining shoes. He had always been overly thorough in his work, insisting on breast examinations when other doctors did not. This was the first time I had met him without Marc. I was told that I needed to be shaved before the operation, so I went along to a cubicle expecting to be met by a nurse. When he returned, plastic razor, metal bowl and soap in hand it struck me as odd, but given that I was full term and more, had been a private client, and I being ever the pragmatist, had to assume this is just what happened.

He proceeded to shave me, slowly, carefully, fastidiously. He made no conversation but concentrated at the job at hand. I looked at the ceiling, the yellow curtains around us and anywhere else I could within the confines of the space, anywhere other than him shaving me. Then he left, and I gathered my things, dressed, and returned out into the hot airless day.

A look from Dr Lorero signalled that action was required. A mask loomed towards me and I knew the inevitable was coming, I dreaded it and welcomed it at the same time. The plastic dome felt like failure. When I woke, my daughter lay in my husband’s arms in another small room, connected, but separated by thick glass. Marc smiled wanly at me through the glass as the nurses busied around, and the doctor deftly tidied the knots to his stiches. The bun had been successfully removed from the oven.

The sniff and lick of my dog brought me out of my memory and back with the children again, in the doldrums of that summer. I had discovered that I knew something new about pain. The physical pain from my toe had ousted the emotional pain I was feeling, easing even my fear and frustration about the bonds I lacked and the failures I had made. I suddenly saw what the whole self-harm thing might be for, perhaps the body can only do emotional pain or physical pain but not both at the same time.

I remembered Claudia my student, with me to learn handwork, together with a dozen or so disinterested teenagers. I worked at a Steiner school, so hand-work, singing, knitting and falling out of trees was all part of the curriculum. My work-room was full of knives and scissors, pins, needles, hot glue and many things that could be used to torture if that’s what you had in mind. Claudia had taken my white tailors chalk and sat beside me neatly etching marks across her arms, her sweatshirt was drawn down, fingers tight over her wrists. I’d never thought that self-harm was a real thing, or if it was, then only done by psychotic people, not by passive aggressive girls at hippie schools in Hertfordshire. I’d been warned not to address her head on, she could be disruptive, and the thinking was something along the lines of horse whispering. I sidled up to her, trying to keep calm, what could I do if she picked up the scissors? I had newly sharpened them this morning. I was terrified of her and what she could do. Her friend called her bluff, saying ‘but you wouldn’t really’ it was then that she released her left hand from its tight grip, she pulled up her sleeve and there on her arm were the same marks as she had drawn in chalk, white, fine and precise, but this time they were made of flesh.

Soon after I had given up the job at the end of the summer term preferring my own challenges at home to the mob of Steiner kids. Back on the floor, the little minnows in the tank carried on their routines, the snails and algae reminded me that I had neglected yet another duty.

I knew then that I had to do something, I wasn’t going to sink any further, and although my challenge seemed immense I knew the alternative was not an option.