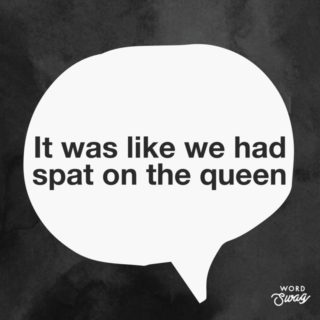 Sometime in 1963 I went down to our high street and headed straight to the record store and bought my first ever record, the Beatles’ single “I want to hold your hand.” Even at the age of 10 I realized something was going on in the larger culture and that this record was my ticket to that ride.

Everything was changing, and over the next decade the musty, stuffy, convention-filled England was being tipped over in a riot of colour, hair, music, drugs, sex and anything else that challenged the established order. And me and my friends were part of this revolution and it felt fantastic, even if we only half-heartedly understood what was really going on.

The world was divided between us and them, and walking down the street you could clearly see who was who. It was like being part of an underground tribe, and we just laughed at the stuffy conventions of the straight world and their outdated values.

Sometimes we overstepped ourselves in our zeal. There was one occasion when a group of us had just returned to our village, all hyped-up, from a concert by the psychedelic rock band the Edgar Broughton Band (1968-2010). The band’s finale for some time had been a song called “Out, Demons Out!” and it was a real rabble-rouser of an ending, and we were still chanting it as we walked down the high street.

And then we came upon our village’s war memorial. Now, every town in England has one of these memorials, they are sacred places dedicated to those lost in both world wars. Well, somehow by the time we had passed it and I looked back there was “out demons out” written in large black letters all over it.

The furor that this raised locally was no joke. It was like we had spat on the queen. But, I’ve often thought about what we were really doing with that graffiti and it seems to me we were saying we were not going to be bound by the guilt trips that had been laid on us regarding the sacrifices that had been made for ‘us’ in the two wars. They weren’t our wars and we didn’t want to be bound by the legacy of them. We wanted them out of our lives and “Out, Demons Out!” seemed a very reasonable thing for us to be demanding.