It All Began in Birmingham 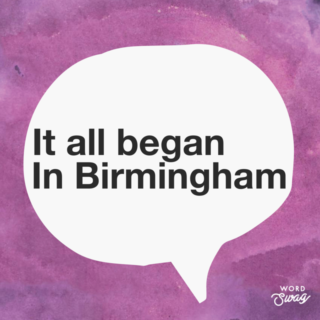 People often tell me that I am from Birmingham. Those people are not wrong. I arrived in Tring after living in Staffordshire, Warwickshire, London, East Hertfordshire and now, The Chilterns. Each location has its own identity and cultural features on the national map – moving southwards from the Midlands.

Inside me there is always a great desire to be doing something else or being somewhere else. I am a nightmare to spend a day with – or worse, a holiday. If I am walking along admiring architectural sights and spot a lively pavement café, beguiled by food smells, especially cake or garlic, then I want to sit. After ten minutes I’m fidgeting. I rarely drink coffee or tea and can’t see the point in paying for water when I have a bottle of it in my bag. Cake? Not really, it will only emphasise the growing podginess. Lunch? It’s not that long since breakfast and I’ll defer my appetite for a good evening meal. I want to move on.

Did this restlessness begin back in Birmingham in my early teens? Left by working parents in school holidays to look after a younger sister and brother, I often escaped with friends to walk a mile and a half from home to Aston Hall. The impressive Jacobean house was a great contrast to my own three-bedroom semidetached in Erdington. I loved the place and didn’t mind the long walk for short legs, alongside the main road with the canal on my right, through the rapidly growing Asian atmosphere of Witton and past the Aston Villa football ground.

Entering Aston Hall for a reduced fee for children was like walking from the back of the wardrobe into another world where the past had been preserved by well informed custodians. Its central building is flanked by identical twin annexes protruding from the front like guards protecting the Main Hall. After many visits I almost knew its history by heart, but after fifty years I needed the website to remind me of its rooms and contents. Key features are laid out in a as faithful a replica of its original times as possible. If you visit, don’t miss the damage in the staircase where a cannonball flew through the window, an open door and hit the banister when the Hall was attacked in 1643 by Parliamentary troops.

The sight never failed to impress whichever of my friends I had dragged along with me. On the 360deg visit on its website I couldn’t see the phallic shaped pillar of salt that sat on the kitchen table. It had survived centuries, but not the last decades. I didn’t see the butler’s seat that disappears into the panelling behind where he smoked a crafty pipe when all was quiet. It must still be there.

In recent years I have added Hatfield House and Waddesden Manor to my list of fascinating historical places to visit in Hertfordshire, each with their own historical roots. And it all began in Birmingham.