My family in Willian through the years 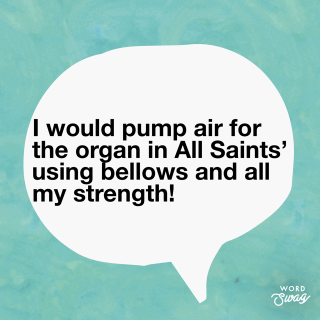 My grandfather Impey was one of ten children. The Impey family lived in a two up, two down cottage at the side of the Lych-gate of All Saints’ Church, Willian. When I lived in Willian in the 1940s there was a model train that ran round the garden. My great grandparents’ grave is under a tree in the churchyard at the back of the garden.

My grandmother was Miss Bardin before she married my grandfather Impey. She was the headmistress of Willian Village School until her marriage in September 1894.

Many years later, when I was 8 years old, I was a pupil at that same school. I remember the teacher wearing bright lace stockings. There were cottages opposite the school where a mother and her disabled son lived. They would wait for school to end so that we could say “Hello” to them.

Today, if you stand in the same spot you can only see, set far back from Church Road, the First Garden City New Terrace Cottages built in 1939 and all that remains of the old cottages are a few bricks in the garden wall of number 2.

The cottage next to the former village school, Park Cottage, is built on what used to be the playground – the railings are still there!

Number 1, Mount Cottages used to be a police house. The policeman was called PC Izzard; I sometimes played with his daughter, Jill.

My mother and I had come to the village to live with my mother’s aunt, Mrs Jessie Grace Ashby (née Impey) and her husband, Albert Ashby. Albert used to be the golf professional at Letchworth Golf Club. They lived in The Warren, Willian Road which had been built by Jessie’s father, my great-grandfather, Mr Edward Impey when they had to move from the cottage.

Sadly, my great aunt and uncle lost their only son, Albert, who was in training in the army when he contracted cerebral meningitis and died at the age of 19. He was given a funeral with full military honours at All Saints’ Church, Willian. My father joined us following the blitz on Coventry and there was also another lodger, Steven, who had planted the trees along The Broadway, Letchworth.

Behind The Warren is a rubbish dump where we found many treasures such as marbles which we took from the necks of old-fashioned glass lemonade bottles. The dump was also home to many rabbits, my mother used to go rabbiting there with my uncle Bert and his two ferrets.

I remember steam rollers coming up from Hitchin and rolling the tarmac on Willian Road and the combine harvesters when the field next to The Warren was put to corn. We would go gleaning afterwards for grain for the hens. We also picked mushrooms and collected wood for the copper that heated the water for the weekly wash in the shed. Auntie also used to wash the vestments for the vicar who lived opposite us in “Fiveways”. On Sundays I would pump air for the organ in All Saints’ using the bellows and all my strength!

After my time at Willian village school I went to St Francis College Letchworth, this entailed passing the pillbox near The Lodge. I would walk with my friend, Guy, along the top of the bank beside Letchworth Lane; of course there were no houses then. I remember cows being driven down the lane to be milked at the farm near St Mary’s Church.
The Land Army girls lived in the golf club and the golf course had sheep grazing on it. Sometimes the groundsman would let me ride on the tractor cutting the grass. The golfers were mostly American servicemen from Chicksands and Brassingbourn.

Double decker buses used to run from Luton to Baldock along the Hitchin Road, up Norton Way South to Leys Avenue, down Station Road where they collected parcels from the greengrocer at the bottom of Station Road to be collected in Baldock.

There were army tanks at Letchworth Gate (which was concreted) guarding the Great North Road. I never went there of course but I did visit the Italian Prisoner of War camp in Roxley Court Lane from time to time with my mother who used to buy me wooden toys made by the men. I also used to play with the children at Punchardon Hall: David, Sue and Joe. I would eat junket with them for supper before going home. I later became nanny to their cousin’s children.

On VE day, May 8th 1945 there was a fancy dress parade in the village from The Fox to the farm followed by tea in the farmyard. These are my memories of Willian in the 1940s.