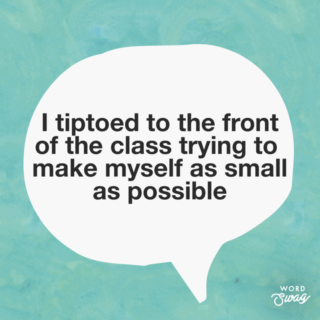 I was 60 when I found out and I just laughed. I found out that the Postmaster’s wife was….. well I suppose that should come later so as not to spoil the story.

I knew the Postmaster’s wife from before I can remember. Her husband owned the post office at Longford. Not our nearest post office but if we were in Longford for anything we would always go in. If we went in we would always talk family with her. She seemed to know all the ins and outs of my complicated family. I noticed that even if she was not serving her husband would call her into the shop to talk. In those days Postmasters were important people so I was impressed, but also a little frightened. I also noticed that my dad would go there with any momentous family news. ‘Just popping in to see Mrs (now what was her name)’, he would say. With the way my dad could talk you knew it would be at least half an hour.

So it was always with a little excitement, and a bit of apprehension, that I walked up Hurst Road with my hand in my mum’s. I say ‘up’ but it was down hill from the school. It had been the secondary school but that had moved and it was now the local primary. At the bottom of the hill the road turned left and you went up hill to the church and the main road.

On the opposite side of the road to the right was a long parade of shops. Slightly to the left was the post office. I would have been 3 when I first did the journey and it seemed a long way to my little legs and the hill a mountain. But, there again you didn’t have houses lining the road all the way up a mountain did you. I had seen pictures of mountains so I knew. Very confusing, so I decided it was a special mountain, and at the top a very special person – the Postmaster’s wife.

I thought when I was 3 that she must be related to God because she knew all about my family and me and I had never seen her before and only God knew everything, didn’t He. I told my older brother but he just laughed and then told everyone else and everyone else laughed. Not for the first time, or the last, I was embarrassed and when I was alone I cried.

Even though I was the youngest of four children I was alone a lot. I was shy and always afraid of saying something that would make people laugh at me. So I would quietly play by myself and listen and repeat what my brother said. Nobody ever laughed at him. That was until my brother caught on. Then he deliberately started saying silly things when he knew only I could hear. I would repeat them and he would laugh at me along with everyone else. I said a few times, ‘but Graham said ‘. This was either met with a telling off for blaming someone else or I was told I couldn’t take a joke. Either way, it was always my fault. So I became quieter and even more alone.

So it was that when we went to Longford, usually when I needed a haircut, we would stop at the post office. There I could be found hiding behind my mum, peering round her shyly at the Postmaster’s wife, not daring to speak in case I said something silly and was laughed at. The Postmaster’s wife would try to talk to me and was kind but when she did she got either a very quiet yes or no or nothing at all and I went further behind my mum.

On my first day my mum was talking to the teacher but I was gone when they looked round. They finally spotted me in a corner quietly playing with toys by myself. For the rest of the term that was the pattern. If a story was being read I would listen with the other children. If we were reading or playing I would be on my own. We were in play groups of 8 but still the other 7 would play together and I would be alone. It was not that I didn’t like school I just stayed alone. After all there were far more toys at school and especially far more books and I loved books.

Another thing that was different then was that you changed teacher every year. So the next term I had a new teacher. So it was that when the summer holidays were over I positively skipped to school. There I had a shock. My new teacher was the Postmaster’s wife. Instead of going to play as I had the previous term I stayed hidden behind my mum. How could someone so important and frightening be my teacher. Of course teachers were important too, but she was married and married women didn’t work, did they? They stayed home and had babies like my mum. Eventually mum went and a frightened, confused little boy was extracted from behind her and promptly grabbed the first book he saw and hid behind it in the corner furthest from the Postmaster’s wife. That was my undoing.

After registration we had a story read by the teacher, but where was the book. The Postmaster’s wife was looking everywhere for it. Then she spotted me hiding behind it in the back corner of the room. ‘Ah, you have it Alan, please bring it out to me.’ Now I was for it! I tiptoed to the front of the class trying to make myself as small as possible, red faced and wanting to cry but not daring to. When I got to the front I got another shock. The Postmaster’s wife said, ‘I know you are a good reader, shall we read it together?’

I had always loved reading with my mum, but mum didn’t mind me making mistakes. What would the Postmaster’s wife think, and what would the children think. I couldn’t say no to such an important person though could I. So I hid behind the book and read it out with the teacher, stumbling over words I knew because I was afraid of making mistakes. But I got through it and the other children gave me a clap. Wow!

Later that day one of the other children on the same table put his hand up. ‘Miss! What does this word mean?’ ‘I am busy helping John, Alan can you help Barry.’ So, I helped Barry and from then on we helped each other and only asked if neither of us knew. Barry became my first friend. Barry was a popular boy so through him I got included in games of tag and British Bulldog (which I was good at) and football (which I wasn’t good at). Barry was good at all games and always got to pick teams.

Gradually I became less afraid of the Postmaster’s wife. To my 5 year old’s eyes I even thought her pretty. Not as pretty as my mum, but pretty. We still on a Saturday when I had a hair cut went in the post office and talked to her, even after she stopped teaching to have a family, and we still talked about the family with her. As the years went on I realised that we always talked about dad’s family. Uncle Roy, Uncle Joe, and Aunt Joyce in particular.

Uncle Roy I knew and Uncle Joe and Aunt Joyce I knew about. They were my dad’s older half brothers and half sister. Grandad had been married before Grandma, but l never knew Grandad he had died a couple of years before I was born. His first wife had died a long time ago. I always had the mystery of why did the Postmaster’s wife know all about my family.

When I was young I thought that Grandad’s first wife had died and then he had married grandma. It was not until older that I realised that though this was true it was not the whole truth. Apparently when he was 16 my dad opened the door to a stranger who shocked him by saying, ‘I have come to see my dad. ‘

It was Roy. He then told my Grandad that his mother had died and that they needed him to certify something as he was her husband. Being poor they couldn’t afford to divorce even though they both had new partners. After the funeral my Grandad married my grandma. Roy was best man as he was when my mum married my dad.

But still the confusion remained. Who was the Postmaster’s wife? Well, I knew that my grandfather had three more children with grandma – my dad, my uncle Reg, and a baby who died in the Coventry blitz in World War 2. But because she had died so long ago it never occurred to me that Grandad’s first wife may have had more children too. The Postmaster’s wife was her daughter by her second partner. I have no idea what you call your half-brother’s half-sister or even if there is a term. But what do you call your half-uncle’s half-sister. In my case, I simply called her ‘The Postmaster’s wife’.