Funeral and Mourning Customs in Hertfordshire 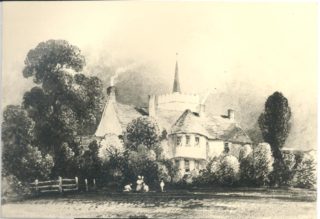 The last of the great landmark events of life, death has been regarded by almost every culture on earth as something important to mark and show respect for. Hertfordshire customs for mourning generally have followed the national norms but, as always, with the county’s own quirks.

If the traditions are to be believed, the people of Hertfordshire were rarely surprised by a death in the community, since signs and omens abounded. Indeed, it was recorded in the 19th century that an old woman from Essendon claimed to have expected the death of a neighbour since “the church clock struck while they were singing in church on Sunday”.

Many animals were omens of death, especially if they acted unusually: a cow lowing continually as it passed the house of someone who was ill; a dog howling at night; a hare looking in at the door; and, of course, one magpie, which is still “for sorrow”. Bringing certain flowers into the house was ominous, too, such as May blossom, hawthorn and white lilacs, as well as snowdrops and primroses unless they were in bunches.

It was very unlucky to meet a funeral procession, especially head on. The best counter to this would be to turn and walk very slowly alongside it till the procession had “outwalked” you. In the early 19th century, a Hertfordshire woman was in the habit of throwing pins if she met a funeral, though it’s not clear whether this was a general superstition or a personal one.

There were of course local ghostly omens, too, such as the hearse with black horses and a headless coachman that drives along the road towards St Paul’s Walden Bury, or the “plague cart” driving around Datchworth Green, both signifying that someone is about to die. A “shining boy” used to appear at Knebworth House when a member of the Lytton family or any of their guests were approaching their end.

Not everyone believed in omens, though. In the little village of Wallington, people ignored all omens of death and claimed they lived as long as they pleased.

Respect for the Dying

It was of great importance to show respect for both the dying and the newly deceased. If someone was on their deathbed, especially in a town where the noise of traffic was greater, peat would be laid around the house to deaden the sound of horses and carts.

Once the person had died, all the curtains in the house were closed, remaining so till after the funeral. On the day of the funeral itself, neighbours would also close their curtains as a mark of respect.

The passing bell would be tolled for about half an hour after someone had died, and this was believed to safeguard their soul as it passed into the next life. The number of tolls at a time depended on who the deceased was. In Harpenden, they tolled three times for a man, twice for a woman and once for a child.

The kind of funeral you had depended heavily on whether you were rich or poor. Most people had “walking funerals”, where the coffin was carried on the shoulders of bearers, their heads and shoulders covered with a pall, all the way from the house to the church  ̶  perhaps a distance of several miles. Four men would bear the coffin at a time, but there would also be four reliefs walking alongside them.

If the deceased was a member of a trade, their coffin would be borne by fellows in the trade, dressed accordingly  ̶  butchers in blue smocks, blacksmiths in white aprons etc. This practice was recorded in Hertford during the 1830s.

The widow’s garb was important, in particular the amount of black crape she wore on her dress, bonnet and veil, since this was supposed to be a sign of the extent of her grief. Widows would often spend money they couldn’t afford establishing their grieving credentials.

Before and after the funeral, the family would lay on refreshments. Describing customs in Harpenden, Edwin Grey recorded that:

no matter how poor the family of the deceased might be, some bread, cheese, and beer was always provided for the bearers…After the procession had gone from the cottage, a friend or neighbour would…set tea ready for the mourners on their return; sometimes if it could be afforded there would be what is now called a ‘high tea’ provided.

As might be expected, the funerals of the rich were far grander affairs. Recording the funeral of the third Earl Cowper in 1790, John Carrington noted (in his idiosyncratic way) that there was “Herce wth 6 horses, 4 Coaches with 6 horses, all Scutchings & his Corrinett carred on Horseback on a Velvet Cushen before the Herce, the men bear head, & about 20 of his Tenants road before with (black) silk Bands & sashes…”

Throughout the world, euphemisms are employed to describe death, whether to avert bad luck or to avoid upsetting the bereaved. It was often said in Hertfordshire that a dead person had “passed over” or “slipped through the hedge”, while a dead person not yet buried was “lying by the walls”. Some called a spade a spade, though, and simply referred to anyone who’d died as “gorn dead”.

Funeral garlands were sometimes made, known as virgin garlands if the dead person was a single woman. These were wreaths of flowers made of materials such as wood, wax, silk or feathers, and they were carried at the funeral by young girls before being hung in the church. A garland that was said to have been carried for Sir Ralph de Rayne, murdered on his way to his own wedding, was kept for a long time in the Watch Loft at St Albans Abbey.

It wasn’t only the humans of the community that were involved in a death  ̶  the family’s animals had to be told all about it. It was important to let the plough horses know and, as with any important news, the bees had to be told. According to Edith Rinder in the Hertfordshire Illustrated Review in 1894:

the ceremony generally takes place upon the day of the death after sunset, when an old servant or other esteemed member of the establishment taps three times at the different hives, and, in a voice audible to the whole community, tells of the sad event that has occurred. On occasion the bees are even regaled with wine and cake, but this is by no means usual.

Finally, on the Sunday following the funeral, the family and mourners were supposed to attend the parish church, processing to the church in as close as possible to the same order that they used in the funeral itself.

More information on funerals and many other Hertfordshire customs can be found in The Folklore of Hertfordshire by Doris Jones-Baker, B.T Batsford Ltd, 1977.