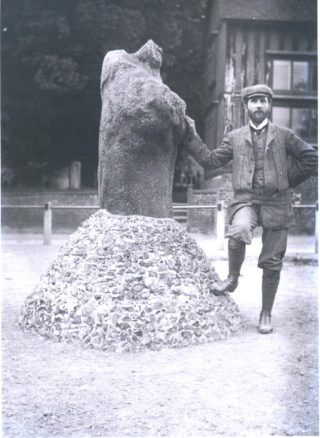 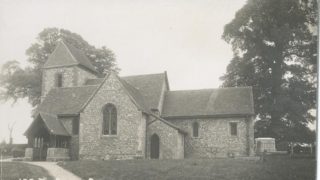 Hertfordshire has a number of icons, from historical events to modern celebrities. One of the most unique and enduring, though, is Hertfordshire Puddingstone.

Like the similar sarsenstone, puddingstone is a silcrete, a type of conglomerate rock that’s almost like naturally occurring concrete. It consists of a very hard, brown to red sedimentary rock with flint gravel embedded in it, making it somewhat resemble a plum pudding  ̶  hence its name.

Although found in a few other places, Hertfordshire Puddingstone is largely peculiar to the county. It’s generally found in small blocks: the largest known is about 10 m across and 2 m deep. They’re generally dug up (a number of large blocks were excavated during the building of the A10 bypass from Thundridge to Puckeridge) but they sometimes emerge from the ground due to heave. However, there are no extensive layers of the rock.

Puddingstone has been used since prehistoric times. Its hardness made it a viable alternative to flint for making tools, and the characteristic puddingstone quern, mostly associated with Roman Britain, appears to date back several millennia before that period.

It’s also used for construction. Blocks of puddingstone are embedded in the walls of over a hundred churches around Hertfordshire, as well as other older buildings such as the icehouse at Ashridge College. Even more characteristic, though, are the many puddingstone marker stones around the county. These can be anything from ancient parish or county markers to 20th century war memorials. A number of large blocks of puddingstone have been erected around Hertfordshire as standing stones, for instance at Standon and in St Albans.

Hertfordshire Puddingstone has many other uses, though. It’s widely used in gardens and rockeries, and its range of colours and ability to retain a high polish make it highly prized by lapidarists.

Geologists argue about exactly how and when Hertfordshire Puddingstone was formed, but Hertfordshire folk have never been in any doubt  ̶  it grows, and then gives birth to new stones. This is because stones appear out of the ground, which has given rise to the names “Growing Stone” and “Breeding Stone”.

It’s unpopular with most farmers, though, given the tendency of puddingstones in fields to break their ploughs. On the other hand, its supposed ability to breed is considered lucky by dairy farmers, who have been known to keep a lump in the milking shed to increase yields.

Puddingstone has long been believed to ward off evil. Small pieces are sometimes kept on doorsteps or carried in the pocket for luck, and there’s at least one recorded case of a supposed witch in the 17th century being buried with a piece of puddingstone. It was supposed “to be placed on the coffin to keep the bodie and spirit within for she is possessed by the devil”. The weight probably also did its part in keeping the witch from rising from her grave.

This wasn’t confined to supernatural evil, though. The last highwayman to be hanged at the scene of his crime, a man called Snooks who was hanged at Hemel Hempstead in 1802, is said to have been buried in a grave marked by two white-painted puddingstones.

In the 1950s, E.A. and E.L Rudge put forward the theory that puddingstones had been used to mark a Mesolithic trackway from Grimes Graves in Norfolk to Stonehenge, passing through several Hertfordshire locations including Cheshunt and St Albans.

This hasn’t generally found favour with scientists, due to the unreliability of the evidence, with the validity of many such markers being questioned. It’s also been pointed out that neither Grimes Graves nor Stonehenge actually existed at the time ascribed to the track. Nevertheless, the puddingstone trackway exerts a powerful attraction for the imagination.

This has also been connected with ley lines, the lines of mystical energy believed to criss-cross Britain. Although ley lines aren’t taken seriously by science, there is some evidence supporting the connection of puddingstone and energy. In 1979, Hertfordshire dowser Frank Stoakes, demonstrated a strong effect above a buried piece of puddingstone, an effect also experienced by several mainly sceptical members of the Hertfordshire Geological Society. Since there is evidence that dowsing works in general, maybe there is something unique about puddingstone.

Whether your interest in Hertfordshire Puddingstone is geological, folkloric, mystical or historical, there’s no doubt that it’s a unique icon of this county. And maybe that’s enough.

Among the books and pamphlets held at HALS that deal with Hertfordshire Puddingstone are: