The Maid of the Mill 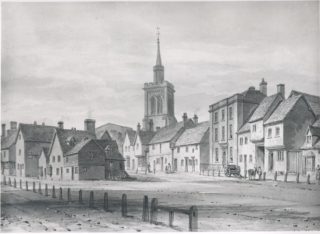 In the mid-18th century, there was an extremely popular song doing the rounds. It was called The Maid of the Mill, a sentimental celebration of a country beauty alleged to have lived in Baldock:

Who has e’er been at Baldock, must needs know the mill,
With the sign of The Horse, at the foot of the hill;
Where the grave, and the gay, the clown and the beau,
Without all distinction promiscuously go.

This man of the Mill has a daughter so fair,
Of so pleasing a shape, and so winning an air;
That once on the evergreen bank as she stood,
I could swear’t had been Venus, just sprang from the flood.

But looking again I perceived my mistake,
For Venus though fair has the looks of a rake;
Where nothing but virtue and modesty fill,
The more beautiful looks of the “Lass of the Mill.”

Prometheus stole fire, as the poets all say,
To enliven the mass he had moulded of clay;
But had Polly been near him, the beams of her eyes,
Would have saved him the trouble of robbing the skies.

While the piece is of extremely limited literary value, it remains a significant local curiosity, because the Maid of the Mill was a real person. In his book about the song, Gerish refers to her as Mary Leonard, but this was her married name*. In her early thirties, she married a man named Henry Leonard, dying twelve years later, and her maiden name is a matter of conjecture.

The mill in question was attached to an inn called The Black Horse, and the miller was also the landlord of the pub. It was recorded as still standing in 1857, but its days were numbered. The main road had been diverted a few decades before, so by now the mill and inn were off the beaten track. They were demolished not long after 1857.

According to the published version of the song, it was written by the young curate of Baldock, love-struck for the beautiful girl. Although the song only identified her as Polly (commonly used as a diminutive of Mary) the directions to the mill were clear enough to lead the song’s many fans straight to her. Neither Mary nor her father, apparently, approved of this attention at all, and she generally refused to allow any of these to see her. We can only imagine what it must have felt like, for an ordinary country girl to be treated like a modern pop star in a world where such adulation was usually reserved for royalty.

Nevertheless, she was occasionally persuaded to receive visitors, if she had guarantees of good behaviour. Gerish gives an account by one Rev. Percival Stockdale of a visit in 1756, when Mary was about thirty and still single. Stockdale describes her:

“The vivacity of her appearance was tempered with that reserve, which was her proper and respectable guard in the company of strangers. There was great gentility and symmetry in her person; her features were fine and expressive; her eyes were black and of piercing eloquence. There was a natural ease, politeness and grace in her manner, which, were they originally wanting, can never be equalled by all the elaborate ingenuity of art.”

The song remained popular, giving rise to alternative versions. These included a pamphlet that alleged to tell the full story of the maid, although it was entirely fictional and called her Lucy Arnold.

The Maid of the Mill is virtually forgotten now. It’s still gratifying, though, to know that at one time the name of Baldock was known up and down the country and produced the 18th century’s most unlikely superstar.

* Elsewhere (The Folk-Lore of Hertfordshire) Gerish refers to her as Mary Iredale, which is possibly her maiden name.