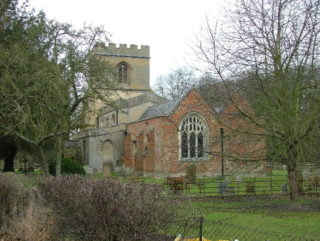 In the far north-west of Hertfordshire, on the road from Hitchin to Barton-le-Clay, lies the small village of Hexton. Chiefly notable for the nearby iron-age hill-fort, Ravensburgh Castle, it’s also the source of a very rare account of the celebrations for the ancient festival of Hock-tide.

One of the more obscure festivals, Hock-tide was nonetheless important in mediaeval England. Celebrated on the second Monday and Tuesday after Easter, it was characterised by the collection of money for the church and parish, sometimes by unorthodox means. These included, for instance, the custom of stretching ropes across the roads to stop travellers, who would then be asked for a donation before being allowed to go on their way.

A recurring theme of Hock-tide seemed to be pitting the men and women of the parish against one another. In general, Monday was for the men and Tuesday for the women, and each were responsible for setting the ropes on their day. It was also common to play games where a member of the opposite sex was captured and ransomed — all in the name of raising money for the parish.

In general, Hock-tide doesn’t seem to have survived the Reformation. However, it’s recorded by Francis Taverner, the lord of the manor at Hexton who died in 1657, that celebrations there “continyed for some few yeares within the reigne of Queene Elizabeth”. Taverner has left an account of the festivities, as remembered by the older people of his time:

many…did go together to the toppe of Weyting Hill; on the very toppe of which hill, being the highest in this parish, was one of those borowes or grave hills…And ther was yearlie a long and a very strong ashen pole fastened into the ground, which the women with great courage did assale and pull downe, striving with all their force to bring it downe the hill, which the men did defend pulling it up the hyll; but by reason of the great stepenes of the mountayne, the women, by that advantage, hayled it to the fote of the hill…and if they got any of the weaker men into their hands whom they could master, them they would baffle and besmear, and thus they laboured incessantlye two or three houres, not giving over till they had brought the pole and sett it up at the Crosse by the Towne House doore…

After which, as always in such festivities, the contestants ate and drank together “without any affront or dislike taken at any hand.” Money was gathered and handed over to the churchwardens — Taverner had seen a parish record from Henry VIII’s reign that suggested the haul was “about 20 s. sometimes more and sometimes lesse.”

The meaning of Hock-tide has been much debated for centuries. Taverner, along with several other older writers who commented on the feast, suggested that it may commemorate the English being “freed from the Danish yoke.” There’s no real evidence to back this up; moreover, there was no agreement among these various writers as to which precise event was being commemorated. The various possibilities suggested include:

A major stumbling block for all these theories, however, is that none of them happened at the right time of year to be commemorated at Hock-tide. The Hertfordshire historian W. B. Gerish puts forward a more plausible suggestion concerning the pole game:

The pole was clearly an emblem, but emblematical of what?…Have we not here some mystical survival of pagan rites — probably of prehistoric origin?…This secular demonstration became known as Hock-tide; and its cry of Hock! Hock! (Hoch is the German equivalent for Hail) was the vocal expression of the joy felt for Nature’s awakening, the coming of the Spring…In the Christian era, the boisterous pastimes coming so soon after the austerities of the Lenten season, represent to some extent the natural flow of suppressed animal spirits which the approach of spring serves but to accentuate.

Whatever the truth of the matter, Taverner’s account of the 16th century Hock-tide celebrations at Hexton gives us a valuable insight into a once-important but now lost festival in the turning year.

The Folklore of Hertfordshire by Doris Jones-Baker, B. T. Batsford Ltd, 1977