Ghosts and Hauntings in Hertfordshire 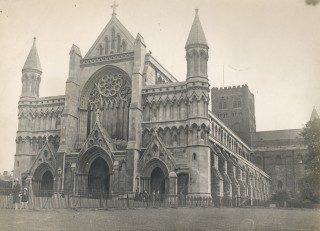 The Abbey at St Albans, said to be haunted by monks
Hertfordshire Archives & Local Studies

No county’s folklore would be complete without its tales of hauntings and ghostly apparitions. Hertfordshire is no exception, with tales of ghosts appearing all over the county.

In general, burial on sanctified ground was said to have prevented the spirit from rising from the grave, but it didn’t always work. One belief was that the first soul to be buried in a churchyard had a duty to protect those who came after. The guardian soul often (as at St Nicholas’s Church, Stevenage and St Lawrence’s Church, Bovingdon) takes the form of a large black dog with fiery eyes, though at Tring the spirit is said to be that of Mother Shipton — though quite why a Yorkshire prophetess should be buried in Hertfordshire is unclear.

If a body were denied Christian burial, for whatever reason, the spirit might certainly walk as a ghost, and the only cure for this was to find and bury the remains. One instance of this was a pedlar who was murdered during the eighteenth century at Bygrave Farm on his way from Baldock fair. The murderer, Thomas Fossey, cut off his head and threw the body down a well, and many travellers subsequently encountered a headless ghost on the road nearby. This only stopped when the pedlar’s remains were found and given a Christian burial.

Being sanctified didn’t seem to prevent monks and nuns from walking after death, and there are many examples, especially at St Albans Abbey and Hitchin Priory. Sometimes this was a punishment for some transgression. Five monks walk at Horse Cross in Braughing every five years as a penance for eating trout taken illicitly from the River Rib. Since they died of poisoning from the trout, the additional penance seems a little harsh.

One notable Hertfordshire ghost is Sissavernes (sometimes spelt Sissifernes), a farmer from Codicote. According to the story, he swore never to leave his land and was consequently buried on a hilltop. His ghost subsequently got up to constant mischief, as remembered in a poem written around 1820 by William Nobbs, parish clerk of Welwyn:

To Sissafernes, where many a tale was told
Of fam’d old Sis, renowned in days of old,
Who played such pranks they say in days of yore
No other ghost had power to play before.
And as he rose from out the Sygian shades
He fed the horses and he kiss’d the maids.
There was a maid, perhaps her name was Beck,
She would not let him, so he broke her neck.
Grandames of him did tell most wondrous tales
To frighten children from the lonely vales…

Well-known figures seen haunting major houses include the Rye House plotter Lord Capel at Cassiobury Park, the traveller Sir Henry Blount at Tyttenhanger, and even Nell Gwynne at Salisbury Hall, London Colney, in the form of a Grey Lady.

Meanwhile, more anonymous figures haunt Hertfordshire from the many wars the county has played a part in down the centuries, from Roman soldiers at St Albans and on the Icknield Way to phantom Royalist prisoners from the Civil War at Watton-at-Stone and Graveley. The major Wars of the Roses battles at St Albans and Barnet have also left hauntings, including a spectral cry of “A-Warwick! A-Warwick!” at St Albans.

Welwyn was involved in the 1002 St Brice’s Day massacre of the Danes ordered by King Ethelred the Unready. As a result, White Horse Lane, on the border between Welwyn and Datchworth, is regularly haunted by a headless white horse carrying the ghosts of the victims, and horses and dogs are said to be reluctant to go into the lane. According to an alternative account, this is the ghost of a royalist farmer, Edward Pennyfather, who was killed along with his white horse by Roundhead soldiers during the Civil War. Datchworth, in fact, has the reputation of being the most haunted village in Hertfordshire, and more information can be found in this article.

Not all hauntings are scary, though. In the eighteenth century, two clergymen, Mark Hildesley and Edward Young, were in the habit of playing bowls together on the green behind the Sun Inn in Hitchin. They clearly enjoyed their games so much that they continued the practice after death, and the sounds and voices can sometimes still be heard.

Ghosts are usually associated with the old days, but they can appear in more modern contexts, too, such as the phantom of the broken-down car on the Watford Bypass. Older, but still in the context of recent technology, was the ghost on the Great Northern railway in the late nineteenth century, which allegedly stepped onto the footplate of a train travelling at full speed through Hatfield station. According to the driver, “It was the saddest face I ever come across. The eyes seemed to look you through and through; and when on top of that I saw that he was all in black, I never was so afraid in my life.”

The fireman appeared to have seen nothing, but the “strange-comer” indicated that the driver should stop the train, and he felt compelled to obey. The train came to a halt just outside Hitchin; and it was only later the driver discovered that, even though the signals had been set fair, there were two trucks on the line up ahead. Without the warning, the train would have crashed into them.

Most stories of hauntings have arisen because people, rightly or wrongly, believed them, but sometimes they’re deliberately made up. I attended Cheshunt Grammar School in the 1960s and 70s, and the old house Fernside which served as an annexe to the school was said to be haunted. This story was apparently invented to prevent pupils from making unauthorised visits to the house — clearly by someone who didn’t understand child psychology.

These are just a few of the many ghostly tales associated with Hertfordshire. More information on the county’s haunted past can be found in: