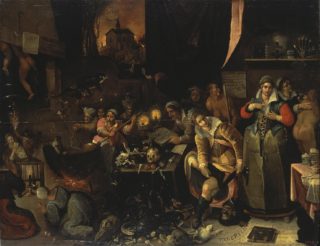 In 1606, a pamphlet was published in London, telling of the conviction and execution of two Royston women, Johane (Joan) Harrison and her daughter Anne, for murder by witchcraft.* According to the pamphlet, a good deal of paraphernalia for inflicting curses was found at their home, and Johane confessed to using them to commit her crimes. To a 17th century perspective, at least, it must have seemed an open and shut case.

However, this case isn’t all that meets the eye. Quite apart from scepticism about whether witchcraft could actually have caused the various deaths and diseases described, it’s not clear how valid the confession was. In fact, it’s not really clear whether the Harrisons existed at all.

Under the snappy title of “The Severall Practices of Johane Harrison and Her Daughter, condemned and Executed at Hartford for Witchcraft the 4th of August Last, 1606”, the pamphlet gave a catalogue of crimes committed by the two women.

Two cases involved farmers who’d fallen ill after insulting Johane. In one case, the sickness was described as “sometimes in a pestiferous heat, at others a chill cold, but at all times in continual aches and wracking of his limbs”. The man was persuaded that the remedy was to draw blood from the witch, and he succeeded in scratching Johane, “upon which within three or four daies (as fast as the man could recover strength) he is up and goes abroad”.

However, Johane took him to court for assault, successfully claiming five shillings plus costs. The illness then returned, and the man eventually died of it. A second case was simply described that “In the same she served another who meeting her out of the towne took the like revenge upon her and recovered.”

Another case involved a woman who accidentally splashed Anne while washing clothes, bringing a threat of revenge. Subsequently, her baby’s cradle collapsed, killing the child. Anne was also alleged to have “bewitched a wealthy man’s daughter in the towne” — although the pamphlet is a little vague as to the nature of the bewitchment or Anne’s reasons. When the family successfully sought help from a scholar (perhaps one of the “cunning men”) who cured her, Anne was supposed to have “caused such a plague upon all his cattell that they all perisht and consumed”.

The last tale concerns an altercation Johane had in an alehouse with a notorious drunkard. After he’d insulted her at great length, she cursed him that “thou throwst in thy drink apace, but shall not find it so easie coming out.” Later that evening, the man developed an infection on his penis and an agonising stomach ache — though we’re not told the outcome of this.

A Chest of “Sufficient Instruments”

Perhaps the most damning evidence, according to the pamphlet, was a chest found during a search of the Harrisons’ home “of such sufficient instruments which she after confest were helpers to her in her practices that could there have been no other proofe or evidence against her, they only had been sufficient judge her unworthy of long life.”

The contents of the chest included various human bones, hair of various colours and a parchment in the midst of which “was coloured a heart proportioned to the heart of a man and round about fitting even to the very brim of the parchment were coloured in severall colours very curiously divided braunches on which hung dangling things like Keys and at the end of them in some places figured and others proportioned a mouth, in brief the whole joynts and artries of a man.”

Johane apparently confessed that she’d used these items, with the help of two spirits, to carry out her various attacks on members of the community. The idea was presumably supposed to be a kind of sympathetic magic, where the bones, hair or images of the organs were used to affect similar parts of the victims’ bodies.

Guilty or Not Guilty?

Few people today would entertain the possibility that magic spells or curses could actually be used to kill or make people ill. While there seems a striking coincidence in the account between the women making threats and disasters occurring, it should be borne in mind that the women were probably poor outsiders, and the account suggests that Johane, at least, was considered extremely ugly. They may have suffered insults on a daily basis, and perhaps one angry response in a hundred came at a time when tragedy struck.

But that still leaves the question of whether Johane and Anne thought they were using these means.

The evidence appears to count against them. The materials described as being found in their home seem fairly damning, as does Johane’s alleged confession. On the other hand, as Gerich points out, we’ve no idea of the circumstances under which this confession was obtained. Torturing a suspect has always been illegal in England, but that doesn’t necessarily mean it was never used. In any case, for a poor, uneducated old woman, there can be a very thin line between intensive interrogation and torture. Similarly, we’ve no evidence of how reliable the finds in the chest were.

In fact, we’ve no evidence of anything in this case — including whether the Harrisons even existed. No mention is made of them in the assize records for the Summer Sessions of 1606 at Hertford. Four people are recorded as being sentenced to death at those sessions. Two were for a straightforward murder they’d committed together, while Alice and Christian Stokes were condemned to death for murder by witchcraft.

So what does this mean? Simon Walker suspects the Harrisons were actually Alice and Christian, but the reason for changing their names in the pamphlet is baffling. It doesn’t help that the assize records give the names of the alleged victims but no details of the crimes, while the pamphlet gives plenty of detail but no names.

Walker may be correct. Alternatively, Johane and Anne Harrison may have come entirely from the pamphlet-writer’s imagination, perhaps with the tales of their crimes culled from various sources. It’s unlikely that we’ll ever know.

Whatever their names, and whether or not they were actually real, the story of the Harrisons seems one of a great many examples of the poor, old and marginalised being demonised in the popular imagination during the witch scare of the 16th and 17th centuries.

* Contrary to widespread belief, English law (unlike many other jurisdictions) has never recognised the crime of “being a witch”. Under English common law, you can only be prosecuted for a malicious act, not for “being” something. In the case of witchcraft, this ranged from serious acts, like causing death, to apparently harmless ones, like using it to search for lost property, though “conjuring evil spirits” was also a capital offence.

The image is a representation by a Flemish artist of how witches were seen, painted in the same year that the Harrisons were executed. Reproduced under Creative Commons licence.