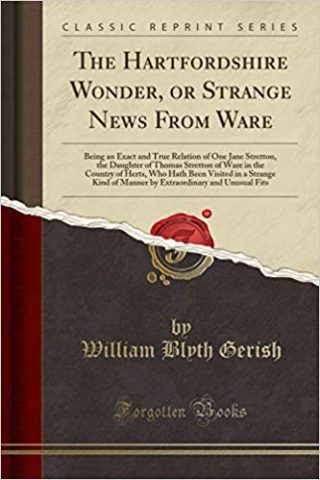 There are many tales, throughout the world and throughout history, of people claiming to have gone improbable lengths of time without food. The limits of human survival without food vary considerably, depending on metabolism and the amount of activity, but there have been well-documented cases of people living for two months without food. That’s assuming, though, that they’re drinking water — without that, survival time is considerably less.

In the 17th century, Hertfordshire had its own case of miraculous survival, documented in a 1669 pamphlet called “The Hartfordshire Wonder or Strange News from Ware”. The tale of Jane Stretton of Ware is a sensational one, mixed up with the century’s witchcraft paranoia. But how much of the story is true?

Jane was certainly a real person. The pamphlet, whose author identifies himself only as “M. J.”, claims that “This Jane Stretton was born at Ware in about the year of our Lord 1649, being the Daughter of one Thomas Stretton, a wheel-wright, who with his wife are {sic} now living in the same town.”

Sure enough, the registry of St Mary’s Church, Ware, records “1649. June 24th. Jane Stratton, daughter of Thomas.” The standard of spelling being what it was at the time, the slight difference is insignificant, and there seems little doubt that this is our Jane.

It’s hard to corroborate any other evidence about her life, but this isn’t unusual for the period. Long before the censuses were introduced, any records of ordinary people depend on often patchy parish records.

According to M. J., Jane’s ordeal began when her father fell foul of a neighbour “who was such a one as the Country people term a Cunning Man, a Wizard or Fortune Teller”. The incident seems a bit bizarre. Having asked the man to use his arts to find a lost Bible, Thomas then chose to insult him, claiming that “then he must be either a Witch or a Devil seeing he could neither write nor read”.

“A month after,” writes M. J., “the wife of this Fortune teller or Cunning Man, which you please to term him, comes to Stretton desiring this of his daughter Jane (who was newly come out of service) a pot of Drink, she being ignorant of what had passed betwixt her father and the other man, willingly does it…About a week after the same woman comes again and desires a pin of her…”

Following the first visit, Jane began suffering from “violent raging fits”, which grew worse after the second visit — a sure sign, to the thinking of the time, that she was bewitched. In addition, “her body swells like a bladder puft up with wind ready to burst, all her members were distorted and as it were put in the wrack”.

Jane fell into what appears to have been a state of semi-consciousness, during which, we are told, “In 6 months space she neither eat anything nor voided any excrements.” Many strange occurrences were reported during this time, including being haunted by “the Devil, or his Imps…sometimes it was in the shape of a Toad and at others like a Frog, or a Mouse”. Flax, hair and thread and pins were found in her mouth, while at one point (evidently during a period of greater consciousness) she complained of a sharp pain in her back, and a knife was found in her bed.

Eventually, some neighbours went looking for the Cunning Man’s wife, resolved to bring her to where Jane was lying. When she was found, however, she told them “That if they had not come she could not have stayed any longer from her.” No indication is given, however, of what outcome this might have had, but M. J. suggests that, after a year, Jane’s illness still continued, though she began taking some food after nine months.

The Truth of the Matter

Leaving aside the charges of witchcraft (more suspicious than usual since, in spite of the paranoia of the time, the couple don’t seem to have been prosecuted) there’s no reason to doubt the broad outline of the story. Various illnesses could have produced the fits and semi-catatonic state described — perhaps an extreme form of epilepsy was partly responsible, for instance.

The items from in her mouth could have been the result of her chewing clothes or blankets in her semi-conscious state, while as for the apparitions — frogs, toads and mice were all frequent visitors to the homes of the poor at the time, especially as the house would have been fairly near the River Lea, without having to evoke the Devil. The pins and knife are harder to explain, but they could have been placed there to bolster the evidence for witchcraft.

The claim that she ate nothing for nine months seems hard to credit, even given her inactive state, but this isn’t what it seems. M. J. lets slip the crucial fact that she had no food “save only some few liquid Meats”. What exactly these were we don’t know (some kind of broth, perhaps), but they may well have been enough to keep her alive.

Although this was presented in its day as a wonder, dressed up luridly with the trappings of witchcraft, it seems likely that Jane Stretton simply suffered from a disease which, today, would be diagnosed and treated relatively straightforwardly.

A more detailed account, including a transcript of the pamphlet, can be found in W.B Gerish — The Hartfordshire Wonder, 1908