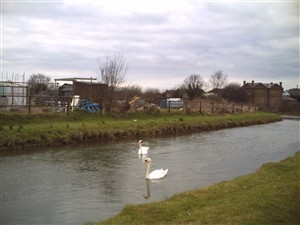 The modern allotment is, in many ways, the descendant of the common-land principle central to Anglo-Saxon peasant society.

Elements of these rights, reduced and circumscribed, remained in force after the Norman Conquest.  However, during the late medieval period and later, landowners increasingly tended to enclose their land, denying the traditional rights of villagers to graze their animals and grow extra food on the common-land.

The enclosures were opposed both by communities and by organised groups, most notably the Diggers. Led by Gerrard Winstanley, this was a radical group which flourished from 1649-1651 and believed the earth was common property and should be cultivated, not used for private pleasure.  They set up communities in Surrey and elsewhere in the Home Counties, cultivating common land and attempting to reclaim enclosed land, but the movement had disintegrated by 1651.

During the 17th and 18th centuries, the drift from the country to towns and cities created a large urban poor class who had no means to grow their own food.  This state of affairs came to the attention of the Victorian reformers, who wished not only to encourage the poor in cities to improve their diet and to exercise in the open, but also to distract them from the lure of the “demon drink”.

A series of Acts of Parliament encouraged local authorities to provide allotments, culminating in the Allotment Act of 1887 and the Small Holdings and Allotments Act of 1907, which imposed obligations to provide land for this purpose.

Allotments through the Twentieth Century

Food shortages during both World Wars created a high demand for allotments throughout the country, especially during the “Dig for Victory” campaign of the Second World War, and new plots were bought up for this use.  Much of this was unused land owned by the railway companies, which is why many allotments today are close to railway lines.

More land was bought up under the provision of the Allotment Act of 1950, but demand declined after food rationing came to an end, and many plots were sold to housing developers.  In recent years, however, there has been a new surge of interest, fuelled by concern for self-sufficiency and healthy food.  Most allotments today have long waiting-lists.

Allotments vary in size, but are most typically 10 rods (about 254 square metres) and are usually owned by the local authority, either freehold, leased or rented.  Depending on this, they are designated either as statutory (freehold or long lease) or temporary (rented or being used pending another purpose).

The Borough of Broxbourne owns fifteen allotment sites, of which four are in Hoddesdon.  These can be found at Old Highway, Stanstead Road, Lampits and Lord Street.  Until recently, the Lampits site was under threat of being sold for development, but this proposal has now been withdrawn.

In Hoddesdon, as throughout the country, growing food both in gardens and allotments is more popular than ever, and the trend shows every sign of continuing to rise.