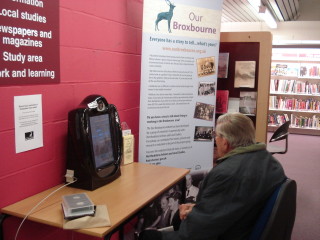 A visitor recording his memories of Hoddesdon
Hoddesdon Library 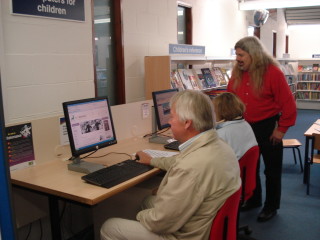 A new DVD has just been released, chronicling the history of Hoddesdon.

Produced and presented by Stephen Poulter, owner of books@Hoddesdon and directed by Steve Fisher, Hoddesdon: History and Heritage follows the history of the town from the Domeday Book to the present day, featuring contributions from local historians Sue Garside and David Dent, footage from the “Hoddesdon Newsreels”, filmed in the 1950s and 1960s by Tom Franklin, and contributions from local residents Thomas Knight, Malcolm Norris and others. Reminiscences notably include memories of the building of the Tower Centre and what was demolished to make way for it.

On the 22nd October 2011, the DVD, which is available from books@Hoddesdon, was launched with an event at Hoddesdon Library, attended by an invited audience that included the Mayor of Broxbourne, Cllr Eddy Rowland.  The DVD was shown in its entirety, following a talk by Mr Poulter.

Visitors were also invited to record their own memories of Hoddesdon and to browse the Our Broxbourne and Herts Memories websites.