A GRANDFATHER IN THE FIRST WORLD WAR 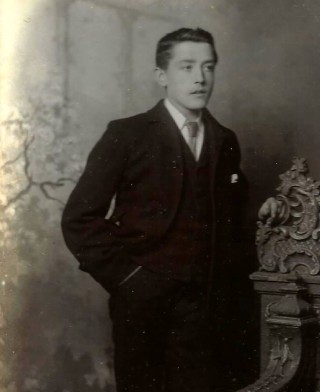 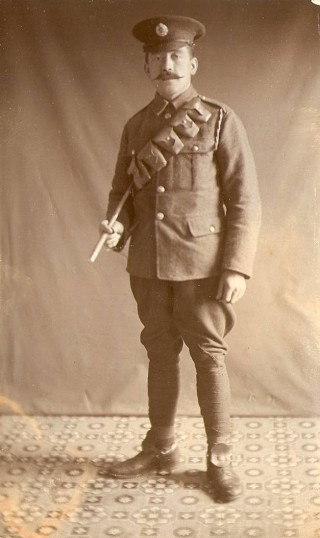 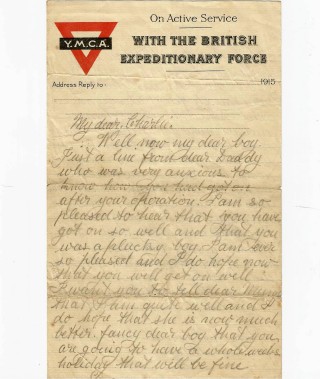 A letter to my Father, from the 'front'.
Terry Askew 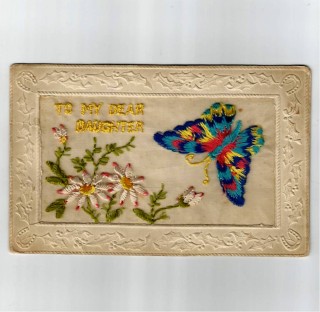 A French made card for my Aunt, from the 'front'
Terry Askew 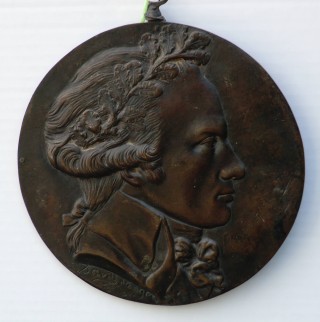 Medallion of Robespierre recovered from the battlefield
Terry Askew 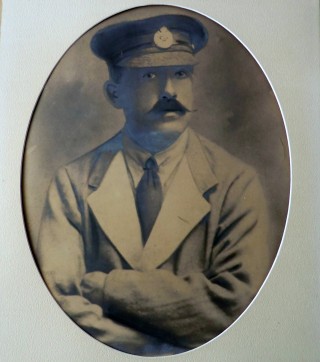 Grandfather in his hospital 'blues'
An old family photograph

I remember my Grandfather back in the early 1960’s as an elderly man with an ‘Old Bill’ moustache and a twinkle in his eye, who successfully grew the most enormous dahlias. My early childhood name for him was ‘Grandad Whiskers’, for obvious reasons, and I recall that he had great difficulty in keeping tea in his cup due to acutely shaky hands resulting from his war wounds.

He spoke little to me of the First World War, beyond mentioning losing horses in the mud and seeing bloated dead animals as far as the eye could see.Occasionally, family members would say how he was badly wounded by shrapnel and how, sometimes, he would start talking of the war and then be too frightened to go to bed after re-living his experiences.

Various items have been handed down to me including a bronze medallion of Robespierre (more of this later), photographs, and letters from the front. These have been supplemented by whatever records of his army service I could extract from the archives subsequently but, sadly, now that I want to know more, there is no-one alive I can ask who can fill in precious details.

Percy Gabriel Askew, an engraver by trade, no doubt in company with a friend or two and buoyed up with patriotism, volunteered  on 23rd January 1915, to serve with the Royal Engineers. [As I write, I am looking at a copy of the very attestation countersigned by the Recuiting Major almost 100 years ago]. Without any experience of the euphoria and the mood in those days its is a little hard to understand as my Grandfather was then 35 years of age with four children, one of whom was an infant. Through the family I learned that my Grandmother, when informed of what had taken place, slapped her husband round the face and through tears of dismay, asked “What will become of us?”.

Grandfather, after a short tour of duty in Dublin, went to Flanders where, in August of 1915, he received his first wound, in the leg. Some time later, on a date and at a place I am still seeking to establish, his platoon was virtually wiped out and he was severely wounded by an enemy artillery shell-burst. After lying in the mud for several days he was, surprisingly, brought in by Portuguese soldiers who, very few are aware, took part in the Great War. Whilst lying in the mud, in his delirium his hand closed upon a bronze medallion – some seven inches in diameter – possibly blown out of a building close by, and he was still holding this when he was taken into a dressing station. He never parted with it and the item now holds pride of place in my home.

Obviously he was repatriated, and I have a large photograph of him taken at a military hospital wearing his hospital ‘blues’. Percy Askew was eventually discharged on medical grounds, being assessed as 50% disabled for which a ‘grateful’ country awarded him a pension, in view of his 5 dependants, of 6/- (30p) per week. He languished at home with his wounds for some time afterwards and my father, as a young boy, became the principal breadwinner for the family until his earlier employer, respecting his military service, took my Grandfather back into employment on special light duties.

Despite all this, and continuing to carry shrapnel in his body for the rest of his life, Percy Askew survived into his eighties.

I, like so many people now in later life, dearly wish I had taken the opportunity years ago to find out more of my Grandfather’s experiences which are so much more interesting to me now.