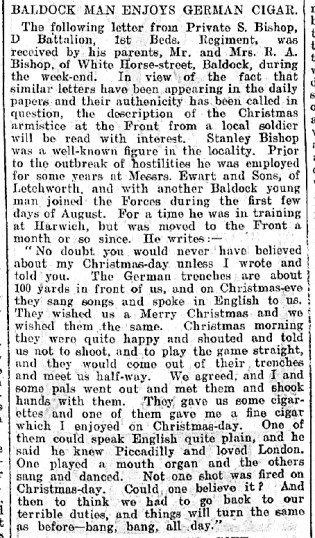 Stanley Bishop served in the Bedfordshire Regiment and throughout his time in the Army he was a prolific letter writer.  These letters were sometimes light-hearted and at other times reflected the tragedy of war.  His style of writing was clear and straight forward giving the experiences of a Baldock lad to those at home.

His parents, who kept an ironmonger’s business in Whitehorse Street in Baldock, seem to have enjoyed his letters enough to pass them on the local papers.  The one shown here is probably the first printed and tells the oft-repeated story of the Christmas Truce from his own viewpoint.  The article appeared in the Hertfordshire Express (9th January 1915) and makes the point that many had not believed the tales coming from the Front of the events of Christmas Day.

But when Stanley’s letter was published the news came from someone who the folk of Baldock knew – he was one of their own and could be believed.