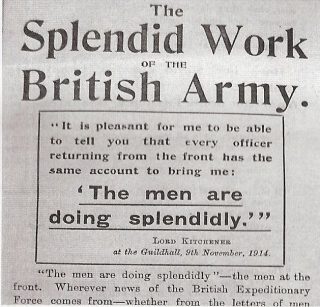 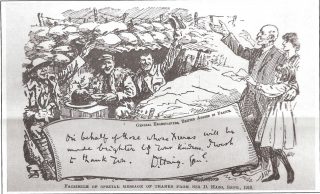 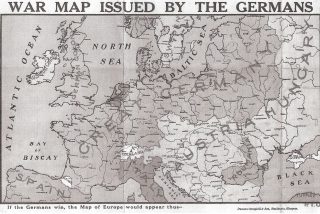 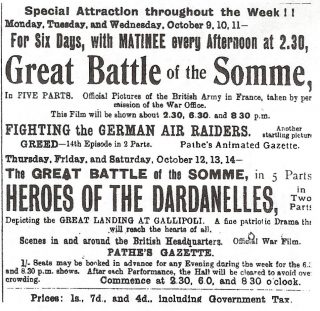 All of Hertfordshire's cinemas showed The Battle of the Somme Documentary as well as patriotic dramas and newsreels.
Hertfordshire Archives and Local Studies 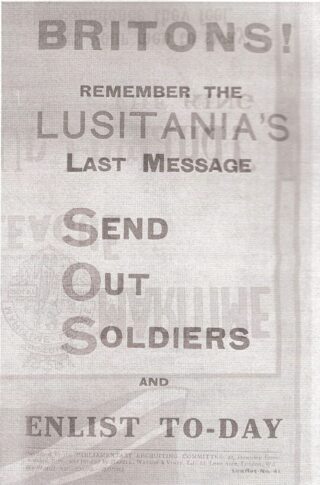 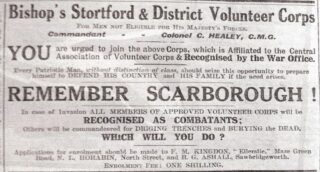 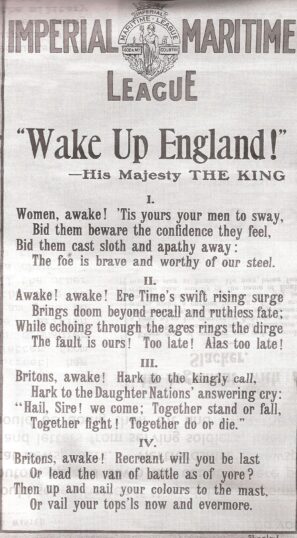 Propaganda was used to ensure that people would only know what Government wanted it to know.  All forms of information were controlled and newspapers were expected to print what the Government was promoting.  Headlines were used to stir up emotions.  British success in battle was emphasised rather than the small gains actually made.

The authorities went to new depths to darken the enemy’s name.  Posters were deliberately designed to shock and spread revulsion.  They informed people about the ‘terrible things’ that the Germans were doing in Belgium, whether the stories were real did not matter.

Other posters played on people’s fear of invasion. Many were entirely fictitious but the Government had to convince the public the war was necessary and encourage men to join the forces.  It was also necessary to suggest that British Forces were happy and making positive strides in their endeavours.

In the autumn of 1916 a documentary (The Great Battle of the Somme) was the latest piece of propaganda to rally the people to keep supporting the war.  There had been newsreels before, but this one showed real fighting and death.  Letting the public see it was a big gamble.  People would either be outraged and demand a stop to the war or feel pride and sympathy.  Over 20 million people saw the documentary in six weeks and the effect on the public was surprising.  It made people committed to the war effort.

Freelance contributors up and down the country were paid to write impassioned articles for local newspapers.  Hertfordshire’s newspapers were filled with optimistic stories and letters from serving soldiers, keen to tell those back home that they should be doing their bit and what they were missing out on.

One for the stay-at-homes

‘Mr. Hendry, of Raynham Road, [Street] has received a short but pointed letter form Corporal H Catlin, 1st Battalion Grenadier Guards (7th Div) with the British Expeditionary Force in France. I am glad to say, he proceeds, that I am in the best of health and feel quite happy and all the other lads seem the same.  When I have a chance, I want to talk to some of the chaps that have stayed at home and lain on feather beds while we are lying on straw. I suppose it will be at the station when we come home to do the cheering part of it but we boys don’t want any of that.  They can play a better part by coming out and doing a bit.  There are some poor old chaps out here at the age of 50m doing their bit’       Herts Mercury, April 1915

In April 1915, a letter signed from ‘a looker on’ commented on the youthful constabulary.  @It appears to be recently recruited, no doubt, to fill vacancies by members who have joined the army and some of the recruits are ‘beardless boys’.  It is very surprising to see able bodied stalwart young men being admitted to the police force when the military authorities are crying out for recruits’.

Tempting Fayre at the Front

In January 1915 a letter published from Private Fred Bullock of Welwyn Garden City, listing all the tempting, delicious Christmas Fare that could had at the front.

Private J Hing of the 1st Herts said they had got to ‘enjoy the mud’ and didn’t take much notice of it.  He likened shooting at the Germans to shooting pheasants.

One from F.W.H. said ‘Remember – it is better to die a hero that live the life of a coward.’