As recorded by Captain Bushby at Manor House, Wormley 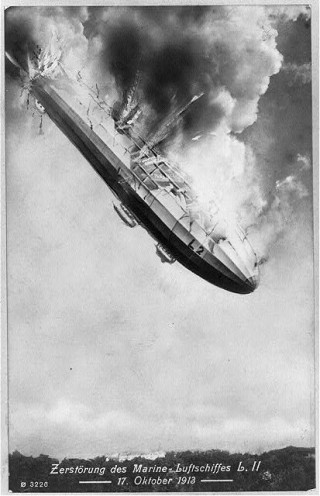 Henry Grant North Bushby was a Captain in the Royal Defence Corps. during The Great War. His home was the Manor House, Wormley.  On the night of 1st/2nd October 1916 he was at home on 48 hours leave from his station in Banbury.

This is Captain Bushby’s diary entry for the night 1st/2nd October, 1916 written down at 7.30pm on th evening of 2nd October.  The paragraph in brackets and the notes at the end were added as notes to his original entry.  Also included is a newspaper cutting of the event.  The newspaper is unknown.

At about 11.55 P.M.1 being on 48 hours leave from Banbury, I woke hearing loud bangs of either bombs or guns & E. came into my room saying there was an air raid going on.  We – and soon all the others in the house – went to the windows and to the S. saw a Zep. marked out by 2 searchlights.  It looked like aluminium softly lit up.  The Zep shifted its position to the W, and after a minute or two seemed to become stationary at a point – as I then thought – over Chipping Barnet.  The guns fired incessantly, and one saw big fat sparks round the Zep of exploding shells. At each burst of firing the pheasants croaked  in the Long Walk.  Four times I heard the “whew” of shells – apparently very near.  And one saw the flicker of the guns.  The Zep tried to escape – turning round – rising – and once moving quickly towards the W.

(At that moment it was nearly over the house.  To see it one had to put one’s head out of the bedroom window & look up.  Probably it was about over the Long Walk, very high up. (I heard later it was more to the S, over Cheshunt, where it had dropped many bombs & done great damage.  But no one was killed as the people saw it coming and ran away.))

The search lights still held it.  Then all the firing suddenly ceased, and there seemed an endless pause with nothing happening, but there was a continuous rumbling sound overhead from (to me) invisible aeroplanes.  Then there was one loud bang2 described by a Potters Bar observer as a “rapid staccato fire” and then another pause.  Then I saw a red disc3, which grew to about the size of the sun – then a red flame which spread till half the Zep was burning.  By then I was cheering (in the morning and for two or three days after I could hardly speak), and everybody else – many millions.  The cheer did not seem so loud, but it was an odd soft cheer extending far away – noise in perspective as it were.  The Zep now began to dive nose down & the flame became a large ragged flare in the sky, breaking up here and there into lesser flames & the whole gradually descending. When it was nearly burnt out it descended below the tree tops.  In the sky a green light was shown by one of our airmen.  Then a red light – the sign that all landing stages are to be lit up for the aeroplanes to descend.  The search lights were still making odd patches of white light all over the sky.  Soon after I went to bed at 12.10 A.M. Oct 2.

What had probably happened was this:- An airman had signalled to the guns to cease fire; had then flown over the Zep, & shot liquid fire onto it.  The entire crew4 were burnt except the Commander, who fell to the ground alive & lived for an hour & a half.  The Zep fell at Potters Bar.

This was seen by 2 or 3 people at Banbury – 60 miles away.  It looked by a “red ball dropping 20 yards” said Frank, who works for Wrench.

At about 1.15AM. I was again aroused by the sound of heavy bombing.  Searchlights failed to find this Zep.  The bombs seem to have been dropped at Willian, near Letchworth.  At 1.35 I went to bed & slept the rest of the night.

After breakfast I went to the village & found boys had bicycled to Potter’s Bar & come back with lots of aluminium.  I bought 2 bits of struts from Reggie Shaw for 5/-.  Meanwhile Devoile, the odd boy, had picked up some scorched silk in the garden; Searing brought in some more he had found on the lawn, and I went out in the rain & picked up 2 pieces in Stony Field.

From conversations I heard in Wormley and in the train it seemed that bombs had been dropped beyond Cheshunt, and at Easneye, Ware.  Wallace told me the Zep’s engines were heard by him intermittently from 10.10P.M. to midnight, and it is known that the Zep. hovered over Wormley & Broxbourne for a long time before it was discovered.  Searing confirms.  He saw it from his cottage at West End, before it was fired at.

I wrote all this down as baldly as I could, but with great difficulty.  It was the most thrilling & intensely dramatic sight conceivable.  There was the sudden alarm at night, the visible and imminent danger of death for all one’s household, the searchlights, the roar of the guns, the suspense, the delivery, the pause, the rumbling, the one bang, the 2nd pause, the spectacle in the sky, and the awful fate of the raiders with 15 million people cheering, and then the green and red signals in the darkness overhead.

The raid extended to Lincolnshire & about 10 Zeps took part.  The total casualties were 1 man & 1 woman.  The man was Pt. Hawkes of my Co – 56 Protection Co. R.D.C. – who was attending to the flare at the landing stage at Willian.

2 I am told the airman has a machine gun which fires an incendiary bullet every third time.  The 1st           2 pierce the envelope & liberate gas, which is lit by the 3rd.

3 others elsewhere said white. But I was looking through a light fog.

The first Zep attack I saw was when Cheshunt was bombed on 8.9.15, 12.0-12.6A.M. On that occasion I counted 36 out of 44 bombs dropped.  London was bombed at 11P.M. in the same day – later.  Next day I went over & saw the damaged cottages & places in the road where bombs had dropped.  Although they fell well inside the town, not a living creature received so much as a scratch.  I have a piece of one of these bombs.

On 13.10.15. 8.45PM. a Zep was over the Manor House having previously hovered over Wormley wood for 20 minutes.  The Broxbourne searchlight picked it up and immediately 2 bombs were dropped – both of which I saw fall.  The ammunition wagon near the searchlight  (in Church Fields) was hit, but no one was hurt.  The anti-aircraft gun fired & must have hit the Zep, for Cossey picked up a bit of aluminium in our garden next day & gave it to F.W.D.B.

The Hertford bombardment I saw also.  Great damage & some loss of life resulted.  That was on the same night at 9P.M.  London too was bombed till midnight.

On 25 Ap 1916 I took up duty at Chelmsford, and at 11.3P.M. that night was aroused by bombing, and saw many bombs dropped in the distance.  Later I heard the engine – as I believe – of a Zep passing over Chelmsford, but 20 bombs were dropped there.

Although Cuffley is about 4 miles from the Manor House, none of us saw the Zep come down, as we were all at Banbury.  Of course, Wallace & the rest saw it.  E. came to Banbury on Sep 2, & the raid was the same night.  Nor, being at Banbury, did I see the Billericay Zep brought down on Sep 23/24.  That too was visible form Wormley & was seen by Wallace but not by E. or DEB, who were asleep.  Another Zep. Was brought down on the Essex coast the same night.  The Potters bar Zep was the 4th brought down in England – all within a month Sep2 to Oct 2. 1916.

On October 1 the L.31 was one of 11 airships which crossed the North Sea.  Mathy crossed north of Lowestoft (a new route for him), and, travelling more slowly than usual, came north of Chelmsford to Kelvedon Hatch, where he was picked up by searchlights.  He turned north-west to Hertford, which he reached at 11.  There he shut off his engines and drifted on the wind.  At 11.30 he started off again south at a high speed and under heavy fire.  At Cheshunt he seems to have abandoned all idea of reaching London.  He unloaded his bombs, and no sooner had this process begun than his airship was seen suddenly to turn to starboard.  She went west, evidently injured, was followed by Lieutenant Tempest, and brought down at Potters Bar, breaking into two as she fell.

Bushby was a barrister-at-law.  He had presumably travelled around as his wife hailed from New South Wales and his eldest daughter was born in Japan.

Presumably Annie Esther is the one referred to as ‘E’ in his diary entry.

The diary has the HALS reference: DEBu F1