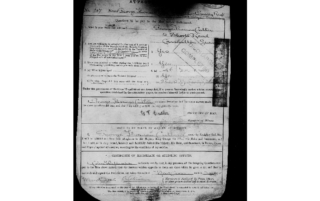 the form filled out at George T Cutler's enlistment 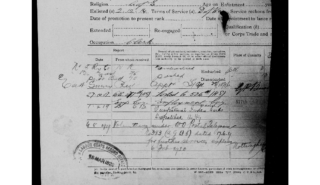 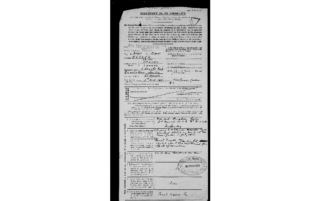 While researching family history at the Hertfordshire County Archives and Library I managed to find military records of my great great grandfather, George Thomas Cutler, from the First World War.

In 1915 George was a clerk living in Carshalton, Surrey with his wife Clara Cutler and his five children, the oldest of which was 17 and the youngest of whixh was 6. As part of the National Reserve, he enlisted on the 3rd of March at the age of 46, taking the oath at New Cross. On the same day he was deemed fit for service and apponited to the No 8 Railway Corps, East Surrey Regiment.

George was appointed Lance Copral on the 28th of October 1916. He later posted to 524th Home Service Employment Company, a part of the Labour Corps, on the 27th October 1917. Disability statements show that he served within the United Kingdom from his enlistment in 1915 until 1920. He was disembodied – returned to a regular career after the war – on the 14th of April 1920.

Other documents show that after the war George claimed disability due to military service, listing both an injury to the abdomen caused by an accident on guard at New Cross, London in July of 1915, and heart trouble and fainting fits starting about December 1915 caused ‘from effects of operation’. He was examined on the 8th March 1920 and said to have a <20% degree of disablement. A renewal or revision of award form show that he recieved additional pension due to D.A.H. – disordered action of heart. This bonus was later ammended to include his wife Calra.