Police Court appearance in his socks 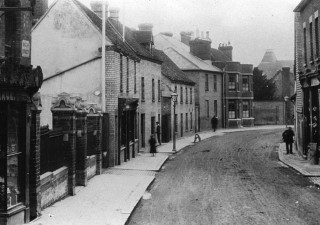 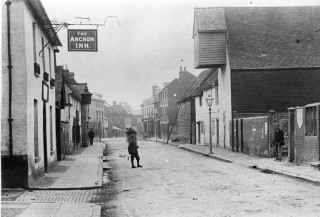 Another view of South Street
Hertfordshire Archives and Local Studies

During the evening of 9th August 1916 a gunner, Harry White, was arrested in South Street following his drunken and disorderly behaviour by PC Springett.

Gunner White had come down from New Town Road and encountered a Sergeant and a Private from the Royal Defence Corps, who he addressed in disgusting language and to whom he made insulting remarks. (Note: The Royal Defence Corps consisted of soldiers too old, or unfit, for active service overseas, which could account for the drunken tirade).

A witness nearby protested about the language and requested Gunner White to moderate his behaviour, which caused him to “act like a madman” and “rush at the witness”. The brave witness, together with a Pte Goodchild, overpowered White and delivered him to the Police Station.

Wearing neither puttees nor boots, it would appear that, during his temporary incarceration at the Police Station, the prisoner added to his tally by wilfully smashing much of the glass in his cell window – cost of repair estimated to be 15/- (75 pence present day).

The following day Gunner White appeared before the Bench of Petty Sessions MINUS HAT, BOOTS, AND PUTTEES and pleaded guilty to the drunk and disorderly charges PLUS the wilfull damage to Police property.

In mitigation, the Prisoner told the Chairman of the Bench that he was a married man, on six day’s leave prior to going abroad with the Royal Garrison Artillery (Note: An arm of the Royal Artillery, originally for coastal defence at home and abroad, specialising in the use of large calibre and siege guns. Merged with the Royal Artillery in 1924). He went on to say that he was due to go back on duty by the following evening.

In the circumstances, the Chairman of the Bench could only adjourn the case with an order that the Prisoner be detained at the Police Station until the time of his train, when he would be accompanied to the railway station by a police escort.