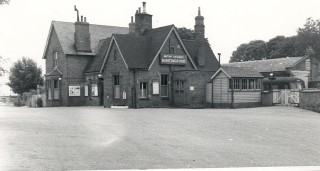 What a shame the Buntingford branch-line disappeared.

On 30th May 1914, it was reported that, at Datchworth, the old whipping post, an interesting relic of the past, has been re-erected in its usual place adjacent to the ducking pond, and is available for the use of visitors.

They must get some peculiar visitors in Datchworth, who either want to whip each other or re-enact the ducking stool procedure until one or other of them dies!!

In October 1914, there was an advertisement for a cottage to let, in Hertford Heath, near the church, which had 4 rooms and a scullery, all for 5s 6d weekly, inclusive.

On 24th October 1914, it was announced that Lieutenant Geoffrey Francis Bowes-Lyon, had been wounded.  He was born in September 1886 and was the grandson of the 13th Earl of Strathmore, and the son of Colonel Francis Bowes-Lyon (brother of the present Earl) who formerly commanded the 2nd Volunteer Battalion of the Black Watch.  He was gazetted a 2nd Lieutenant from the Militia in 1905.

We all know where the Bowes-Lyons fit into the royal family! As a matter of interest, and as an aside from the newspaper article, I saw the Bowes-Lyon name on a 1st World War grave in Belgium — he was also a relation of the Queen Mother.

In December 1914, the Mercury said that E. M. Adams wished to announce the opening of a high class restaurant and commercial hotel at 27a High Street, Hoddesdon, with moderate prices and “best goods only”.  He advised that “particular attention would be given to pleasing customers, and that a comfortable dining room would be available for parties etc”.

Recipe for a German Sausage:   ‘Cook in a British Kitchener: use a Japan enamelled saucepan: Greece well with Russian tallow: flavour with a little Jellicoe: serve up with little French capers and Brussels sprouts’.