The Road to Conscription 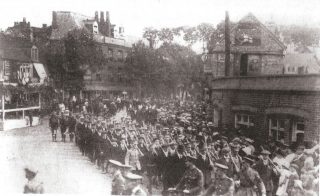 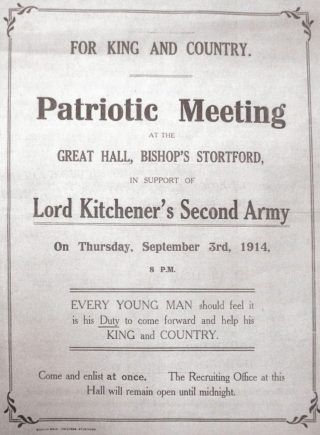 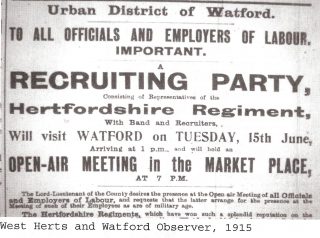 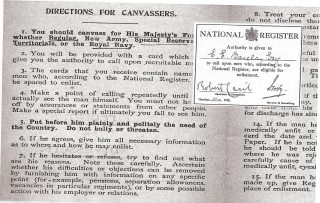 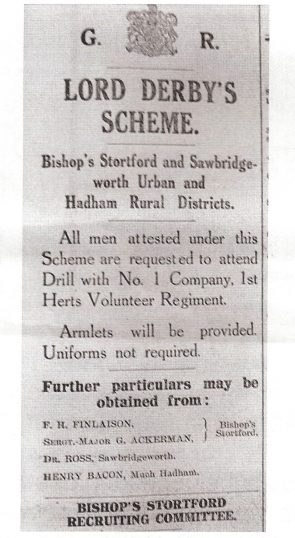 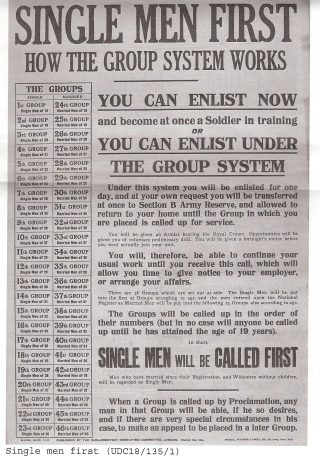 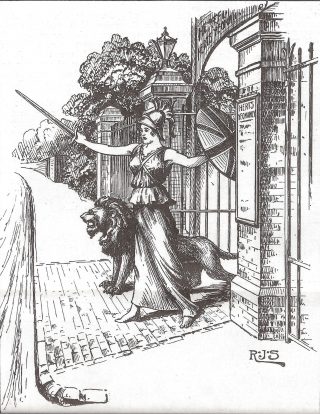 Britannia's "Call to Arms" to Watford Men at the Clarendon Hall. from Watford Illustrated 1915
Hertfordshire Archives and Local Studies 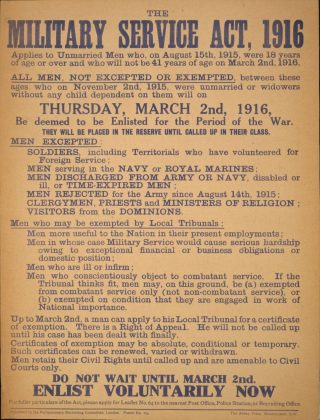 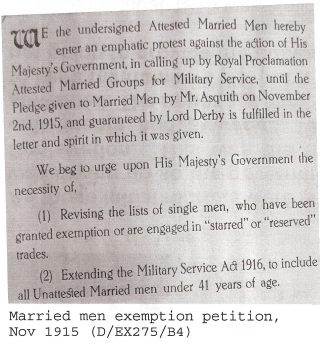 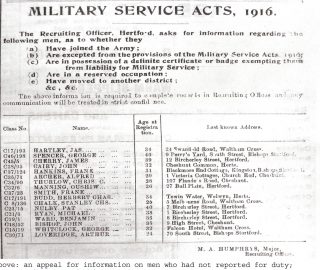 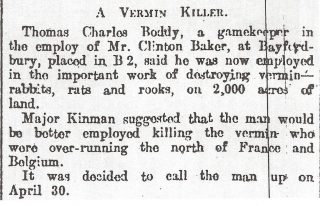 Many tactics were used to persuade men to volunteer for the army.  ‘Patriotic’ meetings and ‘recruitment’ parties were two examples.

Women were encouraged to persuade young men to enlist.  One man from Hemel Hempstead who was away from his business when war broke out discovered, when he got home, that none of his forty men had volunteered.  After his wife had a few words twenty volunteered.

As the war moved into the spring of 1915 many initial recruits had been killed, injured or taken prisoner. Enlistments averaged 100,000 men per month but this could not be sustained. In May 1915 the upper age limit for recruits was raised from 38 to 40 in an effort to keep up the number of recruits, but it was becoming clear that voluntary recruitment was not going to provide enough men to continue to prosecute the war.

So Sunday, 15th August 1915 was declared National Registration Day. On that day all men and women in the country aged between 15 and 65 years of age, except soldiers and sailors and inmates of certain institutions, were required to complete and sign a registration form.  This census identified that there were five million men of military age who were not in the forces although 1,6 million of these were in protected occupations.

Canvassers called on all the men who had registered and were considered suitable.  The canvassers tried to persuade them, plainly and politely, to enlist or try to elicit the reason(s) why they would not enlist.

In October 1915, Edward Stanley, Lord Derby, was appointed Director General of Recruiting.  In a speech at the Mansion House on 19th October he outlined the Group Scheme, by which men were informed that they could continue to volunteer or attest that they would volunteer when called upon to do so.  The men were put into one of 46 groups based on their age and whether they were single or married.  The groups would be called up in order, at a fortnight’s notice, and at that point any man in the group could if there were special circumstances apply to be placed in a later group.  The scheme was often referred to as the Derby Scheme. Opponents of the scheme claimed the men were volunteering to be conscripted!

The War Office declared that 15th December 1915 would be the last day for voluntary enlistment.

In January, 1916 the Military Service Act was passed bringing conscription into effect for the first time.  Conscripted men were no longer given a choice of which service, regiment or unit they could join.  Exemptions were only granted to men already serving in the Forces, the medically unfit, clergymen, teachers and certain classes of industrial workers.

A second Act passed in May 1916 extended conscription to married men.   This was emphasised by ‘The King’s Message to the Nation” dated 25th May 1916, (the day after Empire Day) in which he deemed it necessary, on the advice of his Ministers, to enrol every able-bodied man between the ages of 18 & 41.  He also expressed ‘my recognition and appreciation of the splendid patriotism and self-sacrifice which they [the People] have displayed in raising by voluntary enlistment , since the commencement of the war, no less than 5,041,000 men.’

In the first year 1.1 million men were enlisted.  Men who had been declared medically unfit were issued with an armlet.  This helped them if they were questioned about why they were not in uniform.

Many men failed to report for duty and as a result local newspapers became full of calls requesting information as to their whereabouts.  Men or their employers were able to appeal to a local Military Service Tribunal.  Appeals were made on the grounds of work, business or domestic hardship, medical reasons and conscientious objections.  Many were granted non-combatant duties.