The Beating of the Bounds 1913 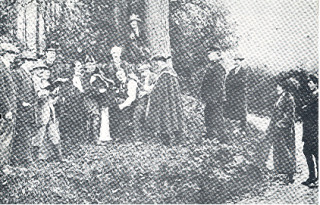 An attempt to revive an ancient custom ’the beating of the bounds’ in St Albans 1913. The picture shows the Mayor, Mr. Horace Slade, being bumped on a Milestone. It has never occurred again. The Town Crier, Mr Crowhurst is the figure in the top hat with a gold braid band, and the be-wigged Town Clerk, Mr. Debenham, is standing just behind the Mayor, with the Mace-bearer in a cocked hat, holding the mace.

The beating of the bounds is a custom which has taken place in a variety of forms in Britain over the last 2000 years and in essence involves inhabitants of an area wandering around its borders and, when a boundary is reached, particular landmarks (or even young children!) are beaten with sticks. During this process fences are also inspected and livestock blessed.