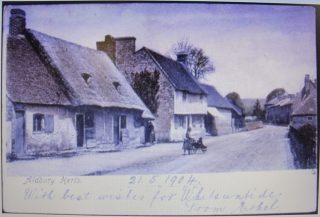 Postcard written in 1904 of an Aldbury street, showing the almshouses on the left.
Courtesy of Hertfordshire Archives and Local Studies ref DE/X1025/2/2/15 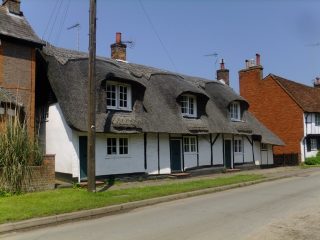 The almshouses from the south. Glad's Cottage is left hand dwelling, by the telegraph pole. Jun 2016
Colin Wilson 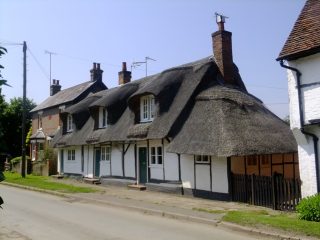 The almshouses from the north, showing the lean-to. Jun 2016
Colin Wilson

It would be nice to know how Glad’s Cottage got its name. However, it is really one of three buildings. The first pair was built on the site of the Town House next to Fulk’s forge in the late 1600s, the later part of the Stuart period. A 1580 Court Baron record mentions the almshouse known as Town. However, Town House is a more general term for a building with a number of functions, as in the case of Barley Town House. See the article about Aldbury Church Houses for some further information. No 47, Glad’s Cottage (the most southerly) was added later. It was brick-built, unlike the earlier timber framed structure. The late 19th century lean-to was originally a separate cottage. Its claim to fame is that it was the smallest dwelling (or almshouse?) in Hertfordshire. They were originally single-storey buildings; half storeys in the roof area were later constructed, resulting in the prominent dormer windows. Originally 4 dwellings, they are now three. A note in the Aldbury Conservation Area document says there were a pair, then three, then four almshouses.

Nowadays they look like the archetypal English thatched cottage, but it was not always so. A postcard from 1904 and A. Whitford Anderson’s photo from 1903 show they were very ordinary buildings. At first sight they do not appear to show the present building, but a close look at the construction materials, windows, doors, chimneys and the adjoining building shows they are the same building. Moreover, the 1904 postcard clearly shows the 3 structures, which is concealed by the present roofline.

By 1834 the Guardians planned to sell off parish almshouses in the county, but the Aldbury locals opposed this and won their case. This indicates they were operated by the parish, not some private benefaction. This could be why Clutterbuck and Cussans do not mention them. Victoria County History (published 1908) says there were still 4 tenements occupied by poor people in receipt of parish relief. The same publication records that about 2.5 acres of land in Tring and Aldbury was let at £4.12 a year, the income being used for the upkeep of the buildings. The linked Sir Thomas Hyde charity has some discretionary provision for maintenance of the almshouse.

The Glebe Terrier for 1763 refers to a ‘house for the use of widows that are helpless’. An 1805 reference talks of 3 tenements and land given by 2 sisters (whose names are not known) ‘to be occupied by widows or widowers agreeable to the bequest of the donors’.

The current provision is for poor persons of good character, who have resided in the area of the ancient parish of Aldbury for not less than two years prior to appointment. An unusual feature is that being aged is not a requirement. There are three dwellings; the tiny lean-to has now been amalgamated with one of the other dwellings.

The Aldbury Almshouses are affiliated to the Almshouse Association. The building was grade II listed by Historic England in 1966, ref 1342213. The charity is registered with the Charity Commission, ref 206108.