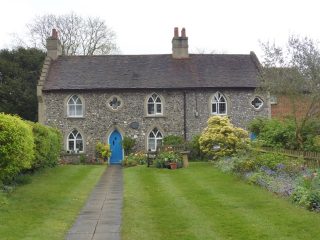 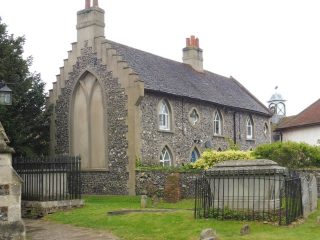 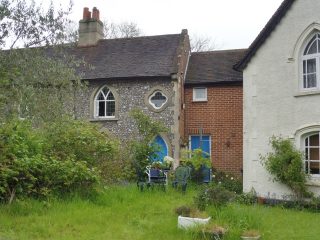 Pagitt's almshouse. The extension at the end away from the church. Jan 2017
Colin Wilson 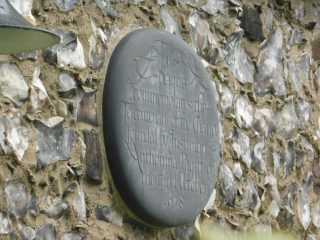 The plaque near the door commemorating the tercentenary of the charity in 1978. Jan 2017
Colin Wilson

The Justinian Pagitt who instituted this almshouse does not seem to be as well known as his father, also named Justinian. His father was a lawyer and diarist who met Samuel Pepys, married Dorcas Wilcox and died in 1668. London Environs shows they had a son, James, but does not mention other children. However the Ancestry website records Justinian as his son. Justinian (jnr)’s will names his wife Antonina, and there is a reference to his brother. He died in about 1681. An alternative spelling is Paget.

A red brick ‘vicarage house’ was leased in 1573, but became the property of lay people only 50 years later. In 1678 Justinian conveyed the building, now known as the rectory house, for the use of the incumbent, the parish clerk and some almspeople. It was enlarged in 1788 by adding two almshouses, rebuilt in 1822/4 and further enlarged in 1846. The style was gothic with flint facing.

The building was locally listed as being of interest, then listed grade II status by Historic England in 1981. The upgrade may be because the buildings were at risk.

As with the nearby Wilbraham almshouses there were issues about paying rates and various gifts. Reference should be made to that article as it seems the two establishments were closely linked by around 1900. Interestingly, the Historic England website cites the same address for both.

It was in 1883 that the George and Mary Ann Pooley Endowment Fund was set up. It consisted of £2500 to be invested, the income to be shared among the residents. In 1958 the house became part of the endowment of the Pagitt ecclesiastical charity.

An article from 1904 reports on the case of George Smith. He had been brought up in a Barnardo’s home, but escaped and spent two years in a truant school. Summonsed to court on a charge of stealing some money, he was detained in the workhouse, but escaped. Eventually he appeared before the magistrate and was sentenced to 4 years at the Bengeo Reformatory. The interesting aspect is that he was only 14 years old, but the report describes him as being from Paget’s almshouse.

The Environs of London: Volume 3, County of Middlesex.
Originally published by T Cadell and W Davies, London, 1795.
This article can be viewed on-line at https://www.british-history.ac.uk/london-environs/vol3/pp517-557

Newspaper articles can be viewed on the British Newspaper Archive website

Barnet Press Saturday 05 June 1897 page 5 col 5.  5s given to women in Paget’s rooms, among others, for Jubilee celebrations.